The Courtship of Miles Standish and Other Poems. 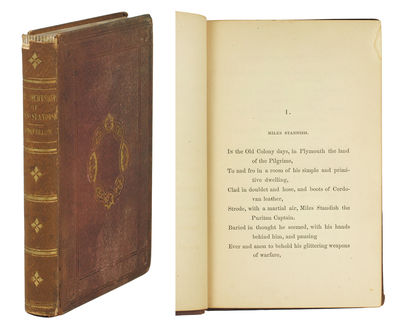 by Longfellow, Henry Wadsworth.
8vo. Boston: Ticknor & Fields, 1858. 8vo, [i-vi], [7]-215 pp. Original purple blind-stamped publisher’s cloth with gilt-stamped central medallions and backstrip, brown coated endpapers, cloth a little worn, crown of backstrip chipped, cloth on hinges just beginning to split, rear endpaper neatly excised. A sound, unsophisticated copy. § First edition, first printing with "The revel of the treacherous wine" as the last line on p.19, in the cloth, gilt-extra binding, one of three binding styles described by Blanck (BAL12122, no priority). An important Longfellow volume with some of his most famous poems. Longfellow claimed that his tragi-comic ballad of a Pilgrim love triangle was inspired by true events; he was himself descended from the Plymouth Pilgrims, including the real-life namesakes of his poem’s protagonists. (Inventory #: 105997)
$100.00 add to cart or Buy Direct from
John Windle, Bookseller
Share this item

2020 Vision: Nineteen Wood Engravers, One Collector, and the Artists Who Inspired Them.

Whittington, UK : Nomad Letterpress and The Society of Wood Engravers , 2020
(click for more details about 2020 Vision: Nineteen Wood Engravers, One Collector, and the Artists Who Inspired Them.)

The Marriage Of Heaven And Hell.

[London : John Camden Hotten , 1868]
(click for more details about The Marriage Of Heaven And Hell.)
View all from this seller>