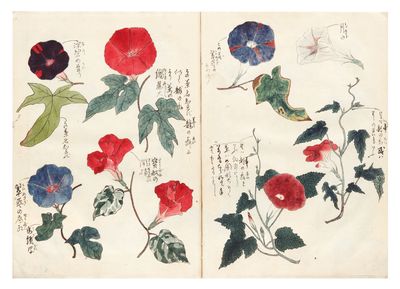 by MORNING GLORIES ALBUM
62 pages (all of the drawings are pasted onto the blank leaves of the album). 8vo (275 x 207 mm.), orig. patterned boards (rubbed), stitched as issued. [Japan: late Edo]. Morning glories, first brought into Japan by the Chinese, were originally used for medicinal purposes as a laxative. But soon the Japanese cultivated them as ornamental flowers. During the Edo period, morning glories became very popular and the subject of aesthetic admiration. Much like "tulip mania" in 17th-century Holland, Japan experienced several morning glory booms in the 19th and early 20th centuries. Japanese horticulturalists have been the leaders in cross-breeding the flowers to develop new varieties. The anonymous artist who executed the highly accomplished drawings in this album has depicted many varieties of the morning glory flower in great detail. There are some black-and-white outline brush sketches of the flowers, but the vast majority are painted in rich colors. The artist has labelled each flower with its name and has drawn the flowers in every stage, from the unopened bud to the full blossom to the withering end of the bloom. He has also depicted the plant's stems, seeds, germinating seeds, and leaves. Many of the blossoms and leaves are also very vividly colored. The final painting is that of a yugao, a gourd that resembles the morning glory. While there is some mostly marginal worming, we do not find it bothersome. Preserved in a chitsu. (Inventory #: 6618)
$9,500.00 add to cart or Buy Direct from
Jonathan A. Hill, Bookseller
Share this item
Jonathan A. Hill, Bookseller, Inc.
Offered by