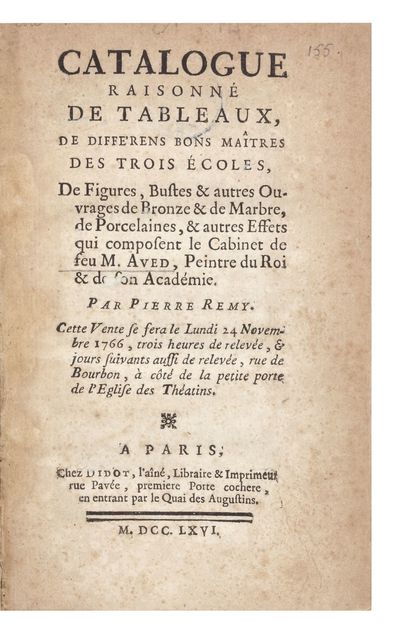 by (AUCTION CATALOGUE: AVED, Jacques André Joseph)
x, 69 pp. Small 8vo (165 x 105 mm.), late 19th-century brown morocco-backed marbled boards (head of spine chipped), spine gilt. Paris: Didot l'aîné, 1766. The uncommon auction catalogue, fully priced and with many buyers' names written throughout in a contemporary hand, of the wide-ranging collection (or stock?) of the famed portraitist, peintre du roi, and close friend of Chardin. According to Patrick Michel, Aved (1702-66) was one of the most well-known examples of an artist with a sideline as a dealer; the Académie de Saint-Luc accused him of "the illegal practice of selling and disloyal competition." The Baron von Grimm wrote of Aved (in trans.): "[He] loved the profession of selling more than being a painter. He was an expert in old paintings and knew how to profit from them..."-Michel, Le Commerce du tableau à Paris..., pp. 106-7. "Aved formed a remarkable art collection. This consisted of ceramics, Oriental bronzes and sculpture and, most notably, Old Master and modern paintings, with a preference for the Dutch and Flemish schools. He bought at sales in the Netherlands as well as in Paris and acquired a reputation as one of the foremost connoisseurs of his day. He seems to have acted as a dealer as well, since many of the pictures he is known to have bought at sales, such as those of Count Wassenaer d'Obdam (The Hague, 1750) and of Edme Gersaint (Paris, 1750), do not appear in the catalogue of his own sale organized by Pierre Rémy in 1766. From this catalogue and other sources it is known that he owned paintings by or attributed to Rembrandt, Gerrit Dou, Adrien van Ostade, Nicolaes Berchem, Philips Wouwerman, Anthony van Dyck, Domenichino, Tintoretto, Guercino, Claude Lorrain, Nicolas Poussin and many others. Among the highest priced pictures in the 1766 sale were a Deposition by van Dyck (probably the work now in Munich, Alte Pin.), a Susanna and the Elders by Rembrandt (probably that now in Berlin, Gemäldegal.) and two paintings by Poussin, one of which may be the Tancred and Erminia in the Hermitage, St. Petersburg. He is also known to have commissioned allegories of Painting, Lyric Poetry and Heroic Poetry from Louis Lagrenée."-Oxford Art online. The present catalogue begins with a detailed biography and then describes 208 lots, with 181 paintings and 27 sculptures. Successful bidders mentioned in the marginal annotations include leading collectors and dealers of the time such as Basan, Menageot, Remy (this sale's expert), Blondel de Gagny, Langlier, Le Blanc, Donjeu, Lebrun, etc. Nice copy of an important sale with valuable notes on provenance. A few annotations closely cropped but legible. Engraved bookplate of G[eorges] P[annier] (1853-1944), the Parisian art dealer, stamp of the Bibliothèque Heim on verso of title, and the ownership inscription of Marcel Nicolle (1871-1934), curator at the Louvre and art historian, on front free endpaper. ❧ Lugt 1563. Bailey, Patriotic Taste: Collecting Modern Art in Pre-Revolutionary Paris, p. 21. (Inventory #: 6621)
$3,750.00 add to cart or Buy Direct from
Jonathan A. Hill, Bookseller
Share this item
Jonathan A. Hill, Bookseller, Inc.
Offered by