Narrative of a Year's Journey Through Central and Eastern Arabia (1862-63). [Two volumes]. 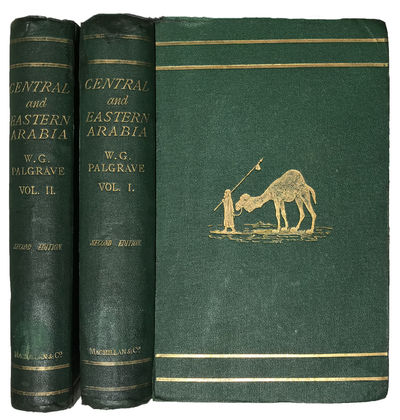 by PALGRAVE, William Gifford (1826-1888).
London and Cambridge:: Macmillan and Company, 1865., 1865. Two volumes. 8vo. (210 x 127 mm). xii, [2], 466, [2]; [vi], 398, [2] pp. Frontispiece, 4 folding plates, large folding colored map; map with short tear (repaired). Original publisher's green pictorial gilt-stamped (Arab leading his camel) cloth; binding neatly restored with kozo, joints reinforced, corners bumped, dent to outer edges of vol. II. Bookplates and rear library pockets of the Wisconsin Consistory Library. Second edition. Palgrave went to Syria in 1862 and journeyed, disguised as a Syrian physician, across Central Arabia in order to investigate how far missionary enterprise was possible. He reported his findings to Napoleon III. The French were also interested in upgrading their own French horse breeds, taking interest in the famed Arabian horses. / William G. Palgrave visited Daw?a in 1863. He wrote, "In this bay are the best, the most copious pearl-fisheries of the Persian Gulf." (p. 386). / "A STRANGE personality, inviting a strange life, a career of curious and indeed of highly romantic interest, yet of imperfect fruitfulness—such is the summary of Palgrave’s individuality, and of his sixty-two busy years of work and wandering. An assortment of mysteries, intangible and confused, hung about him while he lived. His death did not answer many significant and open personal questions. Scholar, poet, soldier, missionary-priest, traveler, lecturer, learned Orientalist and linguist, Arabian explorer, doctor, spy, secret agent, diplomatist,—Palgrave was all these; and in them all the real Palgrave appeared, to friend or to foe, chiefly in fragmentary and uncertain aspects . . . At the same time Palgrave himself was desirous of determining whether Central Arabia offered a real and safe field for Catholic mission work. The district he was asked to traverse and to study on these errands included that portion of Arabia most out of touch with all European sounding; and more of a difficulty than that, it was one savagely fanatical in its Mohammedan orthodoxy. It was a territory in which no European traveler would be tolerated. To visit it invited death. Palgrave accordingly began and completed his tour in disguise. He penetrated to Hofhuf, Raid, and to other centers of Mohammedan and Wahabee religiosity, as a traveling Syrian physician. He nearly came to grief two or three times; but by his assurance and his perfect familiarity with his surroundings, he escaped more than some troublesome and passing suspicions. He even gained the actual favor of the most exclusive authorities of the Peninsula; and pursuing his explorations, drew his various conclusions with complete success, and returned with his head on his shoulders, to write one of the most fascinating records of Arabian wanderings ever penned—his ‘Narrative of a Year’s Journey through Central and Eastern Arabia’ (1865). . . . So far as Palgrave’s mind and work, and especially his exquisite knowledge of Eastern life and peoples, have a literary representation, we find it in the ‘Narrative’ of his risky expedition through Central Arabia; and not less clearly in one bit of fiction of astonishing brilliancy, sincerity, and vividness." [Warner, C.D., The Library of the World’s Best Literature. (Inventory #: ME1084)
$450.00 add to cart Available from
Jeff Weber Rare Books
Share this item