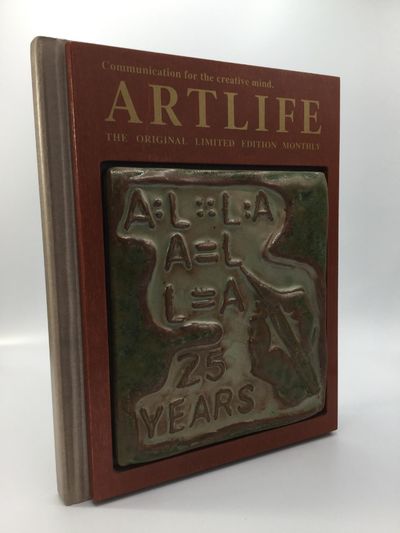 by Cardella, Joe (Editor)
Ventura, California: ARTLIFE, 2006. First Edition. Hardcover. Near fine. Limited to 120 copies. The Twenty-Fifth Anniversary Issue and final publication of ARTLIFE (or ART/LIFE), which billed itself as the longest continually published artists' periodical of the Twentieth Century. Conceived as a "conceptual exchange" among artist and poets, ARTLIFE specialized in both the ridiculous and the sublime, bringing together as a cohesive whole original collages, photographs, drawings, music, and poetry. Each issue was assembled by Cardello from hand-signed copies of the original works submitted to ARTLIFE by the artist. This issue features contributions from nearly 50 artists and poets, including Leeann Lidz, Henning Mittendorf, David St. John, Fidel Vidal, and Hiroko Yoshimoto. Also includes an index of objects used by artists on the pages of the first 164 issues of ART/LIFE. Quarto. Original gray buckram binding, with a striking ceramic tile designed by Joe Cardello inset within a wooden frame on the front panel. Near fine. (Inventory #: 69441)
$350.00 add to cart Available from Johnson
Share this item

London : Collins , 1947
(click for more details about THE ENGLISH PEOPLE)
View all from this seller>