George Washington to the Convention of the Universal Church 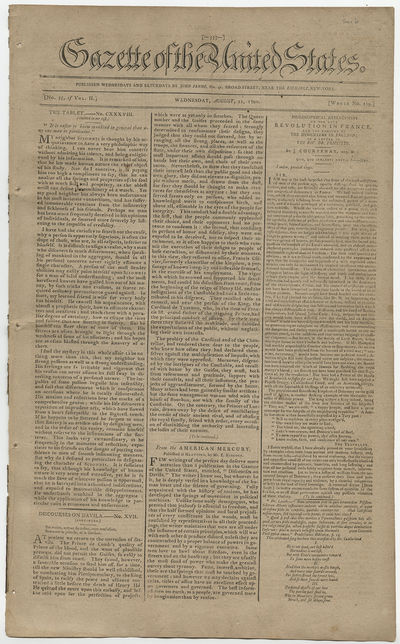 by GEORGE WASHINGTON
"It gives me the most sensible pleasure to find, that, in our nation, however different are the sentiments of citizens on religious doctrines, they generally concur in one thing: For their political professions and practices are almost universally friendly to the order and happiness of our civil institutions." GEORGE WASHINGTON.
Newspaper. Letter to the Convention of the Universal Church, August 9, 1790, in Gazette of the United States, August 11, 1790. New York, New York: John Fenno. 4 pp., 9½ x 14¾ in.

To the CONVENTION of the UNIVERSAL CHURCH, lately assembled at Philadelphia.

I THANK you cordially for the congratulations which you offer on my appointment to the office I have the honor to hold in the government of the United States.

It gives me the most sensible pleasure to find, that, in our nation, however different are the sentiments of citizens on religious doctrines, they generally concur in one thing: For their political professions and practices are almost universally friendly to the order and happiness of our civil institutions. I am also happy in finding this disposition particularly evinced by your Society. It is moreover my earnest desire, that all the members of every association or community, throughout the United States, may make such use of the auspicious years of peace, liberty, and free inquiry, with which they are now favored, as they shall hereafter find occasion to rejoice for having done.—With great satisfaction, I embrace this opportunity to express my acknowledgements for the interest my affectionate fellow citizens have taken in my recovery from a late dangerous indisposition and I assure you gentlemen, that in mentioning my obligations for the effusions of your benevolent wishes on my behalf, I feel animated with new zeal, that my conduct may ever be worthy of your favorable opinion, as well as such as shall, in every respect, best comport with the character of an intelligent and accountable being.

George Washington received many messages early in his presidency from civic leaders, fraternal organizations, and the elders of a great diversity of religions throughout America. Each offered congratulations, praise of his deeds in war, peace, and politics, prayers on behalf of their congregations or constituents, and more praise for what he would yet accomplish as president. Washington's replies justly count among his most famous pronouncements, setting a boldly inclusive tone that helped the new nation survive and expand.

In September 1789 a group of New Jersey and Philadelphia believers in the doctrine of universal salvation met in Philadelphia and sent out a circular letter inviting those of like faith to confer the following May at the meetinghouse of Elhanan Winchester's Society of Universal Baptists in that city. From May 25 to June 8, 1790, seven preachers and ten laymen, from Pennsylvania, New Jersey, Virginia, and Massachusetts, deliberated and drew up a "Rule of Faith" and a "plan of Church Government," both of which they submitted to the eminent Universalist physician Benjamin Rush for his opinion.

John Murray (1741-1815) was the English-born founder of Universalism in the United States. Washington had met him fifteen years earlier, when Murray served as a chaplain to Rhode Island regiments. Dr. William Eugene Imlay (17-1803) was born in New Jersey and was both a merchant and a physician.

On his return home from Philadelphia, Murray spent several days in New York. On August 9, he delivered the Address to Washington and "was most graciously received."

As he often did in response to such addresses, Washington borrowed the language of the group's address in his reply. Phrases such as "auspicious years of peace, liberty and free inquiry" and "a late dangerous indisposition" appear in both the Address of the Universal Church and Washington's reply. The "order and happiness of society" in the Address becomes the "order and happiness of our civil institutions" in Washington's reply.

Washington's "late dangerous indisposition" was a bad case of influenza that developed into pneumonia from April to mid-May 1790. In the spring of 1790, influenza was epidemic through most of the United States and particularly virulent in New York, where many died. Washington recovered somewhat during a ten-day visit to Long Island in late April, where he could go horseback riding. From May 10 to at least May 20, Washington was confined to his bed, and in mid-May, physicians had no hopes of his recovery. Despite efforts to keep his condition secret, it was widely known in New York and Philadelphia. By May 17, it was clear that he was improving, though he did not resume his regular activities until May 30.

This issue also includes a July 13 notice signed in type by Alexander Hamilton that proposals would be received by the Treasury Department for "the supply of all rations, which may be required for the use of the United States" in 1791 (p4/c3); and An Act to extend "An Act for the Temporary Establishment of the Post-Office" until the end of the next session of Congress (p2/c1).

To the PRESIDENT of the UNITED STATES.

The ADDRESS of the Convention of the UNIVERSAL CHURCH, assembled in Philadelphia, 1790.

PERMIT us in the name of the Society whom we represent, to concur in the numerous congratulations which have been offered to you since you accession to the government of the United States.

For an account of our principles, we beg leave to refer you to the pamphlet, which we have now the honor to put into your hands. In this publication it will appear, that the peculiar doctrine which we hold, is not less friendly to the order and happiness of society, than it is essential to the perfections of the Deity.

It is a singular circumstance in the history of this doctrine, that it has been preached and defended in every age, since the first promulgation of the gospel, but we represent the first society professing this doctrine, that have formed themselves into an independent church. Posterity will hardly fail of connecting this memorable event, with the auspicious years of peace, liberty and free inquiry in the United States, which distinguished the administration of General Washington.

We join thus publicly with our affectionate fellow-citizens in thanks to Almighty God for the last of his numerous signal acts of goodness to our country in preserving your valuable life in a late dangerous indisposition, and we assure you Sir, that duty did not prompt us more than affection to pray, that you may long continue the support and ornament of our country, and that you may hereafter fill a higher station, and enjoy the greater reward of being a King and Priest to our God.

Singed in behalf and by order of the Convention.