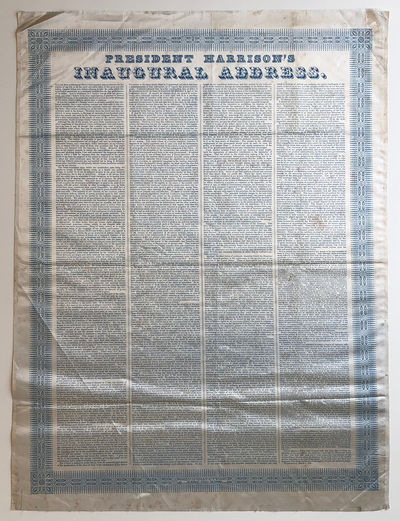 by WILLIAM HENRY HARRISON
On a cold, wet day, March 4, 1841, President Harrison delivered the longest inaugural address in history. Harrison wrote the entire speech himself, though it was edited by his soon-to-be Secretary of State, Daniel Webster. Webster said afterwards that in the process of editing the text, he had "killed seventeen Roman proconsuls." Contracting pneumonia, Harrison became the first president to die in office 31 days after delivering this address. His vice president John Tyler became the new president and served out Harrison's term.

In an 8,460-word address, Harrison presents a detailed statement of the Whig agenda and a repudiation of the populism and policies of Democratic Presidents Andrew Jackson and Martin Van Buren. Harrison promises to reestablish the Bank of the United States, to issue paper currency, to use his veto power sparingly, and to appoint qualified officers of government in contrast to the spoils system that Jackson heralded. He favors term limits, limits on the powers of the presidency, and devotion to the nation rather than party. Harrison avoids specifics on the divisive issue of slavery, which in theory he might have opposed, but of which he was in practice a staunch defender. WILLIAM HENRY HARRISON.
Inaugural Address. Printed on silk, ca. March 1841. Baltimore: John Murphy. 1 p., 18 x 24 in.
This unique printing by printer and publisher John Murphy of Baltimore features the entire text of Harrison's Inaugural Address printed in blue ink on silk. Murphy also printed badges on silk for the Young Men's National Convention held in Baltimore in May 1840 in support of Harrison's candidacy. Murphy (1812-1880) was born in Ireland but immigrated to Delaware with his parents in 1822. After serving as a printer's apprentice in Philadelphia, he established his own printing business in Baltimore in the 1830s. He published the United States Catholic Magazine, a monthly periodical, from 1842 to 1849 and several Catholic theological books. For printing the Proceedings of the Plenary Council of Baltimore
(1866), Murphy received the honorary title of Printer to the Pope, a distinction never before given to a resident of an English-speaking country.

"We admit of no government by divine right, believing that… the beneficent Creator has made no distinction amongst men; that all are upon an equality, and that the only legitimate right to govern is an express grant of power from the governed.... Limited as are the powers which have been granted, still enough have been granted to constitute a despotism if concentrated in one of the departments." (c1)

"it is the part of wisdom for a republic to limit the service of that officer at least to whom she has intrusted the management of her foreign relations, the execution of her laws, and the command of her armies and navies to a period so short as to prevent his forgetting that he is the accountable agent, not the principal—the servant, not the master. Until an amendment of the Constitution can be effected, public opinion may secure the desired object, I give my aid to it by renewing the pledge heretofore given that under no circumstances will I consent to serve a second term." (c1)

"I consider the veto power…solely as a conservative power, to be used only first, to protect the Constitution from violation; secondly, the people from the effects of hasty legislation where their will has been probably disregarded or not well understood, and, thirdly, to prevent the effects of combinations violative of the rights of minorities." (c2)

"The General Government has seized upon none of the reserved rights of the States. As far as any open warfare may have gone, the State authorities have amply maintained their rights.... By making the President the sole distributer of all the patronage of the Government the framers of the Constitution do not appear to have anticipated at how short a period it would become a formidable instrument to control the free operations of the State governments....the entire control which the President possesses over the officers who have the custody of the public money, by the power of removal with or without cause, does, for all mischievous purposes at least, virtually subject the treasure also to his disposal.... It was certainly a great error in the framers of the Constitution not to have made the officer at the head of the Treasury Department entirely independent of the Executive." (c2)

"the delicate duty of devising schemes of revenue should be left where the Constitution has placed it—with the immediate representatives of the people. For similar reasons the mode of keeping the public treasure should be prescribed by them, and the farther removed it may be from the control of the Executive, the more wholesome the arrangement, and the more in accordance with Republican principle." (c3)

"Connected with this subject is the character of the currency. The idea of making it exclusively metallic, however well intended, appears to me to be fraught with more fatal consequences than any other scheme, having no relation to the personal rights of the citizens, that has ever been devised.... If there is one measure better calculated than another to produce that state of things so much deprecated by all true republicans, by which the rich are daily adding to their hoards and the poor sinking deeper into penury, it is an exclusive metallic currency." (c3)

"Our citizens must be content with the exercise of the powers with which the Constitution clothes them. The attempt of those of one State to control the domestic institutions of another can only result in feelings of distrust and jealousy, the certain harbingers of disunion, violence, and civil war, and the ultimate destruction of our free institutions." (c3-4)

"Unpleasant and even dangerous as collisions may sometimes be between the constituted authorities or the citizens of our country…the results can be of no vital injury to our institutions if that ardent patriotism, that devoted attachment to liberty, that spirit of moderation and forbearance for which our countrymen were once distinguished, continue to be cherished. If this continues to be the ruling passion of our souls, the weaker feelings of the mistaken enthusiast will be corrected, the Utopian dreams of the scheming politician dissipated, and the complicated intrigues of the demagogue rendered harmless. The spirit of liberty is the sovereign balm for every injury which our institutions may receive." (c4)

"The tendencies of all such governments in their decline is to monarchy, and the antagonist principle to liberty there is the spirit of faction.... it behooves the people to be most watchful of those to whom they have intrusted power.... When the genuine spirit of liberty animates the body of a people to a thorough examination of their affairs, it leads to the excision of every excrescence which may have fastened itself upon any of the departments of the government, and restores the system to its pristine health and beauty. But the reign of an intolerant spirit of party amongst a free people seldom fails to result in a dangerous accession to the executive power introduced and established amidst unusual professions of devotion to democracy." (c4)

"Always the friend of my countrymen, never their flatterer, it becomes my duty to say to them from this high place to which their partiality has exalted me that there exists in the land a spirit hostile to their best interests—hostile to liberty itself.... It is union that we want, not of a party for the sake of that party, but a union of the whole country for the sake of the whole country, for the defense of its interests and its honor against foreign aggression, for the defense of those principles for which our ancestors so gloriously contended." (c4)

William Henry Harrison (1773-1841) was born in Virginia into a prominent planter family and studied at Hampden-Sydney College and the University of Pennsylvania. He joined the army in 1791 and participated in the Northwest Indian War, including the decisive victory at the Battle of Fallen Timbers in 1794 and the Treaty of Greenville in 1795, which Harrison signed as a witness. He married Anna Tuthill in 1795, and they had ten children. In 1798, Harrison resigned the military and became secretary of the Northwest Territory. He later served in the U.S House of Representative from the Northwest Territory (1799-1800) and as governor of the Indiana Territory (1801-1812). In 1811, he defeated Shawnee leader Tecumseh at the Battle of Tippecanoe, for which Harrison was praised as a national hero. During the War of 1812, Harrison commanded the Army of the Northwest and defeated the British and their Indian allies at the Battle of the Thames in 1813. After disagreements with the Secretary of War, Harrison resigned in 1814. He represented Ohio in the US House of Representatives (1816-1819) and in the US Senate (1825-1828). After running as a regional Whig candidate for the presidency in 1836, Harrison won the 1840 election over incumbent Martin Van Buren. On March 4, 1841, a cold, wet day, Harrison wore no hat or overcoat, rode on horseback to his inauguration, and delivered the longest inaugural speech of any American president. He became ill three weeks later and died of pneumonia on April 4, having been president for 31 days. He was the last United States president born as a British subject, and the first to die in office.

Fine; small amounts of light spotting; some folds and wrinkles but silk remains very supple with no areas of degradation. (Inventory #: 25607.02)
$7,500.00 add to cart Available from Seth Kaller
Share this item