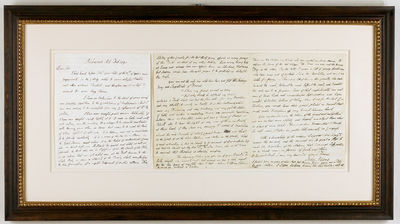 by JOHN ADAMS
A revealing letter to fellow Declaration of Independence signer Benjamin Rush, arguing for a strong executive power in a discussion about the Constitution of Pennsylvania. "'I love my friend as well as you / 'But why should he obstruct my view?' contains a Truth, which has laid the foundation for every Despotism and every Absolute Monarchy on Earth… Emulation almost the only Principle of Activity, (except Hunger and Lust) is the cause of all the wars Seditions and Parties in the world …" JOHN ADAMS.
Autograph Letter Signed as Vice President, to Dr. Benjamin Rush, February 1790, Richmond Hill, Mass. 3 pp., 7⅜ x 9 in.

I had heard. before I recd your Letter of the 12th, of your new Engagements in the Colledge added to your extensive Practice and other virtuous Pursuits: and therefore was at no loss to account for your long Silence.

I have no Pretentions to the Merit of your manly and successful opposition to the Constitution of Pensilvania; but I am very willing to be responsible for any Consequences of its Rejection. I have never despised public opinion deliberately. if I have ever expressed myself lightly of it, it was in haste and with out caution. on the contrary it is always to be respected and treated with decency, even when in Error: but never to be made the rule of action against conscience. it is seldom, and only in small matters to be followed, implicitly. it is a wave of the sea in a storm in the Gulph Streams, except when it is the result of methodical councils or secret influence. It should be guided and aided, as well as informed by those who are in possession of all the secrets of the State. in no nation that ever yet existed, were all the Facts known to the whole Body or even a Majority of the People, which were essential to the formation of a right Judgment of public affairs. The History of this Country for the last thirty years, affords as many proofs of this Truth as that of any other Nation. how many times, both at home and abroad have our affairs been in situations, that none but madmen would have thought proper to be published in detail to the People.

You are not the only one who has seen and felt the Jealousy Envy and Ingratitude of Friends.

'I love my friend as well as you

'But why should he obstruct my view?'

contains a Truth, which has laid the foundation for every Despotism and every Absolute Monarchy on Earth. it is this Sentiment, which ruins every Democracy and every Aristocracy, and every possible mixture of both, and renders a mediating Power, an invincible Equilibrium between them indispensible. never yet was a Band of Heroes or Patriots able to bear the Sight of any one of them constantly at their head, if they saw any opening to avoid it. Emulation almost the only Principle of Activity, (except Hunger and Lust) is the cause of all the wars Seditions and Parties in the world. What is most astonishing is that we should be so ignorant of it, or inattentive to it, and that we should not see, that an independent Executive Power, able at all times to overrule these Rivalries, is absolutely necessary.

The charming Picture you give me of your Domestic Felicity delights my inmost soul: but revives in me a lively regret for the ten years of my Life that I lost: when I left my Children to grow up without a Father.

There are two Parties my friend, who have united in some degree to obscure the fame of the Old Whiggs. The Tories are one, and the young Fry is the other. By the latter I mean a sett of young Gentlemen who have come out of College Since the Revolution, and are Candidates for fame. There is a sett of men in this country, who have hazarded too much, laboured too much, suffered too much, and succeeded too well, ever to be forgiven. Some of those unfortunately are not men of large views and comprehensive Information, and have adopted destructive Systems of Policy. Were it not for this last consideration, you would hear their cause pleaded in accents that would make Impressions on every honest human heart.

You, my dear Sir, enjoy the Esteem of the honest and enlightened and are perhaps more usefully and happily employed than others in places of more Eclat. There is no Man however that I should see with more Pleasure in public life, especially in Congress.

With a knowledge of the modern Languages it is so easy to acquire the ancient, and the ancient are so great a help towards the acquisition of the Modern, that I cannot help, putting in a Word more in favour of Greek and Latin.

Dr. Benjamin Rush I am, my dear Sir your Friend

I forbid you, on pain of what shall fall thereon from giving me a Title in your letters. I Scorn, disdain, despise, (take which word you will) all Titles.

In this letter, Adams expresses his misgivings about the usefulness of public opinion in determining important matters of state. Adams argues instead for a strong executive power capable of making independent decisions. Though public opinion "is always to be respected and treated with decency, even when in Error," it "it is seldom, and only in small matters to be followed, implicitly" because the majority of citizens lack the information necessary to form a "right Judgment of public affairs." According to Adams, it is the responsibility of "those who are in the possession of all the secrets of the State" to "guide and aid" the course of government on behalf of their constituents.

Adams goes on to lament "the Jealousy Envy and Ingratitude of Friends," warning that "this Sentiment…ruins every Democracy." The solution he advocates is "an independent Executive Power, able at all time to overrule these Rivalries" and serve as an "invincible Equilibrium." As Vice President, Adams had an opportunity to serve as that "equilibrium;" in the course of his term, he cast a record thirty-one tie-breaking votes in the Senate, including one protecting the President's sole authority over the removal of appointees.

Only months before writing this letter, Adams had become deeply involved in the Senate controversy over the official title of the President. Though he writes in this letter of his "scorn" and "disdain" for titles, Adams favored the title of "His Majesty the President" over the simple "President of the United States," arguing unsuccessfully that it conveyed more respect for the office.

Ironically, after lecturing on the evils of envy, Adams "delights" in the joy Rush feels in "Domestic Felicity" but regrets "the ten years of my Life that I lost: when I left my Children to grow up without a Father." Adams is speaking of his tireless diplomatic efforts in Europe from 1778 to 1787.

Benjamin Rush (1745-1813) was elected to the Continental Congress in 1776, appointed Surgeon General in the Middle Department of the Continental Army in 1777, instructor and physician at the University of Pennsylvania in 1778, Treasurer of the U.S. Mint from 1779-1813, and professor of Medical Theory and Clinical Practice at the University of Pennsylvania from 1791-1813 – he was the most well-known doctor in the United States during the revolutionary era. During the War for Independence, Rush was part of an unsuccessful plot to relieve General George Washington of his military command. He was a founder and trustee of Dickinson College, helped to found the Pennsylvania Society for Promoting the Abolition of Slavery, and was a member of the American Philosophical Society. (Inventory #: 21178.99)
$100,000.00 add to cart Available from Seth Kaller
Share this item