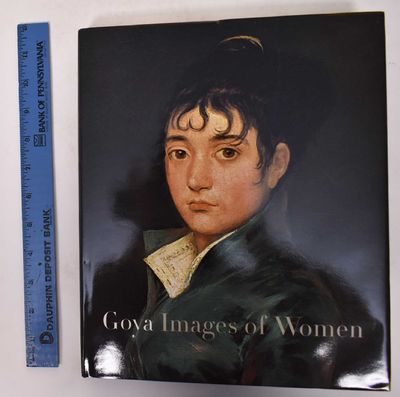 by Tomlinson, Janis A. (editor)
Washington, DC: National Gallery of Art, 2001. Hardcover. New. Color illus. dustjacket over green clothwraps; 320 pp.; 50 bw figures; 130 color plates. Accompanied an exhibition at the Museo Nacional del Prado in Madrid and the National Gallery of Art in Washington, D.C.; Includes several essays delving into Goya's works representing women. "Francisco Goya y Lucientes (1746-1828) created magnificent paintings, tapestry designs, prints, and drawings over the course of his long and productive career. Women frequently appeared as the subjects of Goya's works, from his brilliantly painted cartoons for the Royal Tapestry Factory to his stunning portraits of some of the most powerful women in Madrid. This book is the first to examine the representations of women within Goya's multifaceted art, and in so doing, it sheds new light on the evolution of his artistic creativity as well as the roles assumed by women in late eighteenth- and early nineteenth-century Spain."--Jacket. Contents as follows: Goya : images of women / Janis A. Tomlinson -- Goya's women in perspective / Francisco Calvo Serraller -- Images of women in Goya's prints and drawings / Janis A. Tomlinson -- Fashioning the feminine : dress in Goya's portraits of women / Aileen Ribeiro -- An introduction to Goya's cartoons and tapestries / Concha Herrero Carretero. (Inventory #: 171135)
$29.97 add to cart or Buy Direct from Mullen Books
Share this item