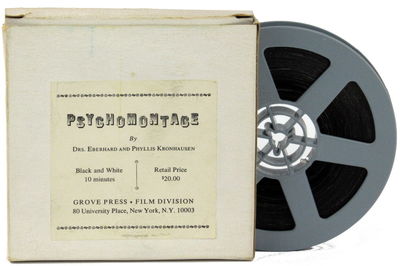 by [Avant Garde Film] [Anthony Balch] Eberhardt and Phyllis Kronhausen
NY: Grove Press, 1963. Original five inch reel of 8mm film in plain cardboard box with paper label affixed to the front. Some light overall soiling, couple of small tears, top flap creased, else very good with the film in presumably fine condition. An uncommon artifact from Grove Press' brief foray into film. Although uncredited, the British filmmaker, famous for his collaborations with William S. Burroughs, contributed footage to this montage of sexually suggestive images backed with a soundtrack that consists mainly of agitated monkeys and heavy breathing. While at first it comes off as a possible send up of avant garde films of the time, you start to realize that these people aren't joking.

Specializing in General Antiquarian with an emphasis on Art, Architecture and Photography

Payment should accompany order if you are a new customer. Current customers will be invoiced with payment due in 30 days. Institutions billed per their requirements. ALL ITEMS SUBJECT TO PRIOR SALE. Books fully returnable up to ten days after purchase with prior notification.. All credit cards accepted. Postage: $4.00 for first book, $1.75 for each thereafter for USPS media mail. Postage for larger books, international orders and priority mail quoted individually. Reciprocal 20% Dealer Discount. All books in at least Very Good Condition in Very Good Dust Jacket unless otherwise stated.
More from this seller

Untrodden Peaks and Unfrequented Valleys: A Midsummer Ramble in the Dolomites

London : George Routledge and Sons , 1890
(click for more details about Untrodden Peaks and Unfrequented Valleys: A Midsummer Ramble in the Dolomites)
View all from this seller>