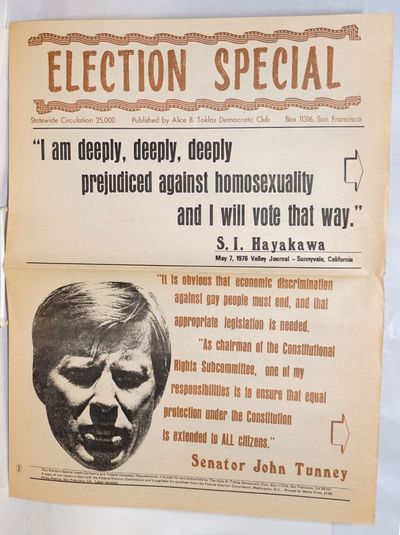 by Mendenhall, George, editor, Cesar Chavez, S. I. Hayakawa, Senator John Tunney, Jimmy Carter, Bella Abzug, Ed Edelman & Richard Hongisto
San Francisco: The Alice B. Toklas Democratic Club, 1976. Newspaper. [4p] folded tabloid on newsprint evenly toned, a collection of political statements from the politicians and activists concerning Gay Rights accompanied by their photos. Above-the-fold from Hayakawa states: "I am deeply, deeply, deeply prejudiced against homosexuality and I will vote that way" Carter: "I oppose discrimination on the basis of sexual orientation" Don't you miss him? (Inventory #: 236325)
$45.00 add to cart or Buy Direct from Bolerium Books
Share this item