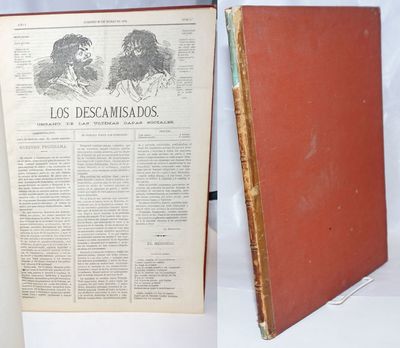 by [Perillan y Buxo, Eloy]
Madrid: Imprenta de los Sres Rojas / Imprenta de Folguera / Imprenta a Cargo de Juan Iniesta, 1873. First three issues of Los Descamisados bound together with first 20 issues of El Pendon in contemporary quarter brown roan over terra-cotta cloth with marbled endpapers, 11.25 x 15.75 inches. Boards are worn with bumped corners, spine lacks leather at top and bottom, large closed tear at bottom of first page of El Pendon Number 3, else very good condition. Each issue of both papers is 4 pages and both were printed in Madrid, El Pendon at Imprenta de los Sres. Rojas, Los Descamisados at Imprentea de Folguera and Imprenta a Cargo de Juan Iniesta. Text in Spanish. Los Descamisados, whose title roughly translates to "The Shirtless Ones: Organ of the Last Social Classes", was the first in a series of papers published rapidly in succession by novelist and reporter Eloy Perillan y Buxo between March and September 1873. According to Pedro Gomez Aparicio in "Historia del Periodismo Espanol: De la Revolucion de Septiembre al Desastre Colonial" only 7 issues were ever published. Its dramatic prose (example: "Our publication proposes to wage relentless war-war to the knife, against you all, stupid tyrants, imbecile tradesmen and merchants, villainous owners of houses and lands you the darlings of fortune, thieves fattened on the sweat of the people...vile oppressors of the people your reign is over, give place to the shirtless ones! Our black banner is unfurled! War against all family! War against all who possess! War against God") led other contemporary newspapers to accuse it of being funded by the authorities to make the anarchist movement look bad. Joseph Termes, in "Anarquismo y Sindicalismo en Espana: La Primera Internacional (1864-1881)" writes that it was "financed by the authorities to discredit the workers movement and its press, using exaggerated, incendiary concepts and phrases", while Max Nettlau writes that it was "claiming to be anarchist, but in fact was libel obviously intended to disparage the idea of anarchism through absurd exaggerations". However Gomez Arpacio claims Perillan y Buxo was a sincere, although eccentric, anarchist who merely intended his paper to be humorous and ironic. Only one copy in OCLC as of 4/10/2019.

El Pendon (The Banner) was a Catholic and Carlist paper possibly created in direct response to Los Descamisados. However, it may have also been intended to satirize Carlist positions through exaggeration. According to "Revistas Contemporaneos" (Volume 134, Issues 2-3, February 15 1907), only 20 issues were ever published. None in OCLC as of 4/10/2019. (Inventory #: 236468)
$500.00 add to cart or Buy Direct from Bolerium Books
Share this item