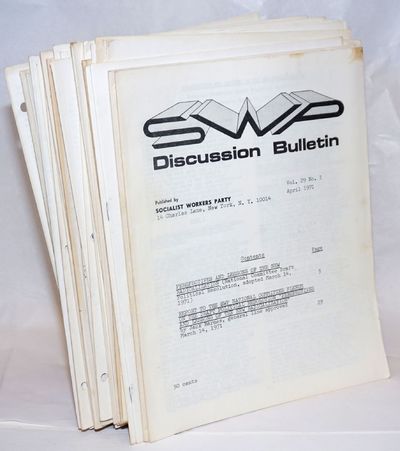 by Socialist Workers Party
New York: Socialist Workers Party, 1971. Newsletter. 28 volumes, all in stapled wraps, 8.5x11 inches, all with worn wraps, some soiling and small stains, some with rolled spines, Numbers 12 and 24 with pen underlining throughout, Numbers 18. 24. and 26 with previous owner's name on front wrap, Numbers 18, 20-23, 25 and 29 with two holes punched along side, Numbers 19 with marker underlining on front wrap, Number 25 with pen notation on front wrap, Number 26 with one article title circled in pen on front wrap, else generally good condition. This year includes discussion around the Proletarian Orientation tendency, much on the Middle East, beginnings of a discussion on the gay movement, discussion of the women's movement, some on the anti-war movement, and more. (Inventory #: 142075)
$30.00 add to cart or Buy Direct from Bolerium Books
Share this item