Trial of Abraham Lincoln by the Great Statesmen of the Republic, a Mock Trial of President Lincoln for Treason 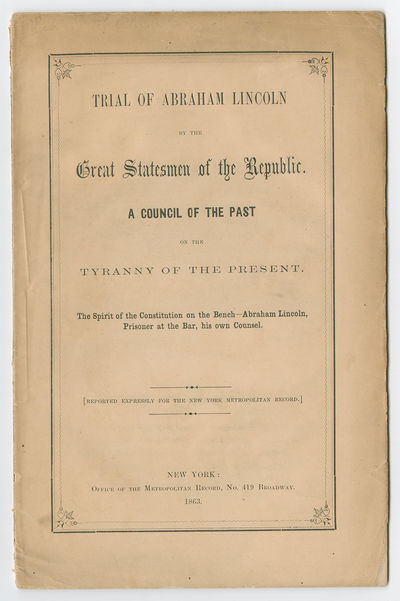 by [ABRAHAM LINCOLN]
In this creative pamphlet, Lincoln stands trial before a jury of his "peers," former presidents and statesmen from American history, including Stephen A. Douglas, Daniel Webster, Henry Clay, John Hancock, Patrick Henry, Gouverneur Morris, Alexander Hamilton, John C. Calhoun, James Madison, George Mason, Elbridge Gerry, Andrew Jackson, Thomas Jefferson, George Washington, and William Gaston. The author compiles passages from their speeches in mock dialogue with the defendant Lincoln as they contradict his defenses against their charges. [ABRAHAM LINCOLN].
Pamphlet. Trial of Abraham Lincoln by the Great Statesmen of the Republic. A Council of the Past on the Tyranny of the Present. The Spirit of the Constitution on the Bench—Abraham Lincoln, Prisoner at the Bar, his own Counsel. New York: Office of the Metropolitan Record, 1863. Original printed wrappers, stitched. 29, [3] pp. First Edition.

"George Washington, the father of the American Union, who was surrounded by the great statesmen of the Revolution and by others of a still later date…had assembled for the trial of the present incumbent … on charges of the gravest and most serious character.... the Spirit of the Constitution…occupied the bench of Justice." (4-5)


"Abraham Lincoln is herein charged with treasonable, intent, purposes, and designs, in having committed the following unconstitutional acts in the course of his administration:

"1. In having declared war against independent and sovereign States under the pretence of repossessing himself of certain forts and other property seized and held by said States.

"2. In having arrested citizens of the United States, and incarcerated them in Government bastiles, without process of law.

"3. In having suppressed the liberty of speech, thereby denying to the citizen the Constitutional right of criticizing the acts of his Administration.

"4. In having prohibited and stopped the publication of certain newspapers for the exercise of the same right referred to in the preceding charge.

"5. In having placed the military above the civil power, as shown in the establishment of martial law over portions of the country which were not embraced within the theatre of war.

"6. In overthrowing State sovereignty, as in the case of Virginia, the integrity of which was violated by the erection of the so-called State of Kanawha within its limits.

"7. In having approved, indorsed, and partially carried into execution the unconstitutional act of Congress known as the Confiscation Bill.

"8. In having approved of the infamous law known as the Conscription Act, which was not only subversive of the Constitution, but violative of State sovereignty.

"9. In having attempted to carry into execution the Emancipation Act, thereby violating the most sacred guarantees of the Constitution. (5-6)


"The criminal looked around the court, and on the faces of the assembled patriots of the past, but as they returned his gaze they, shuddering, averted their heads. Then the Spirit of the Constitution addressing him spoke as follows:

"'You have been tried and found wanting. You have been given the opportunity of saving a nation, but you have stabbed it to the heart. You were born in the freest country under the sun, but you have converted it into a despotism. You have violated your oath; you have betrayed the trust reposed in you by the popular will, and to the outraged justice of your countrymen I now leave you, with the brand of "Tyrant" upon your brow. They will hereafter inflict upon you that penalty which justice demands, while history will pronounce its judgment upon the infamous acts of your Administration.'" (28-29)

Contemporaries, historians and others have criticized Lincoln for violating state sovereignty, freedom of speech and freedom of the press, for suspending habeas corpus and imposing martial law. All of these charges figure prominently in this ghostly trial of the President.

The publisher and possibly author of this pamphlet was John Mulally, the Irish-born editor and proprietor of the Metropolitan Record, a weekly Catholic family newspaper published from 1859 to 1868 in New York City. From 1859 to March 1863, it was the official organ of the Archbishop John Hughes of New York. Catholic critics accused it of taking an "open and avowedly treasonable course…since the war broke out; but more especially since the President issued his Emancipation Proclamation" and of forcing Archbishop Hughes to withdraw his support.

The Indiana State Sentinel, a Democratic newspaper published in Indianapolis, printed much of the pamphlet on its front page, declaring it "perhaps, the most thorough and effective exposition of the terrible character and extent of the departure of the present Administration from the word and spirit of the fathers of the Constitution that has yet been put in print."

In 1863, authorities arrested Baltimore booksellers Michael J. Kelly and John B. Piet, publishers of the Catholic Mirror, for printing works of a "treasonable character." On May 23, 1864, Provost Marshal detectives again arrested Kelly and Piet and searched their store. Among the "inflammable matter" found were 97 copies of this
pamphlet, envelopes with rebel flags, 57 packs of playing cards with Confederate officers, and some 212 Confederate photographs. The authorities imprisoned Kelly and Piet in Fort McHenry. On May 28, Kelly's son received permission to reopen the store, and authorities allowed the press to resume publication of the Catholic Mirror on May 30, while Kelly and Piet awaited trial. On June 1 and 2, Major General Lew Wallace ordered Kelly and Piet released if they each posted a $5,000 security bond not to violate any departmental regulations.

In March 1864, Major General William S. Rosecrans, a Catholic, commander of the Department of the Missouri, ordered the Provost Marshal General in St. Louis to seize all issues of the Metropolitan Record, to prohibit further distribution of the newspaper in that department, and to punish all vendors who sold or distributed issues of the newspaper, knowing their "traitorous contents." Rosecrans had read enough in the Metropolitan Record to satisfy himself that "no reasonable freedom, nor even license of the press, suffice for the traitorous utterances in those articles" and that they were "a libel on the Catholics, who, as a body, are loyal and national." In November 1864, Major General Hugh Ewing, commanding the District of Kentucky, likewise banned the circulation of the Metropolitan Record and seven other newspapers in his district.

In the midst of the 1864 presidential election campaign, the Metropolitan Record
advertised for canvassers to sell this as "the great campaign pamphlet of the day." Mulally later reportedly repudiated McClellan as the Democratic nominee, favoring a peace candidate instead.