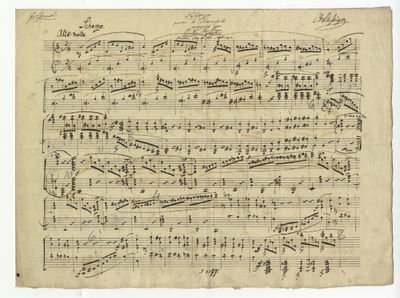 Slightly worn and browned; creased at central fold; some offsetting. A German composer, conductor, and teacher, Reissiger studied at the Thomasschule in Leipzig from 1811-1818, moving to Vienna in 1822 where he took theory lessons with Salieri; he went on to teach composition in Berlin in 1825 "until invited in the following year to succeed Weber as director of the Hofoper in Dresden... Under his direction the Dresden opera became acknowledged as the best in Germany; in 1842 he gave the first performance of Wagner's Rienzi..."

"Although Reissiger must have written most of his works for use in Dresden, his operas were performed in Prague, Copenhagen, Leipzig and Weimar; his overtures were widely played, and his masses were sung in Erfurt and Vienna. The Allgemeine Wiener Musikzeitung mentions performances of the fifth and third masses in Vienna in 1843. His other works include 80 or so published piano solos and 70 or 80 collections of songs and duets." John Rutter and Manfred Fensterer in Grove Music Online. (Inventory #: 31206)
$2,200.00 add to cart or Buy Direct from
J. & J. Lubrano Music Antiquarians
Share this item