[Craig, Edward Gordon-Long Inscription by Craig to his Lover] Si Ideia in Teatru 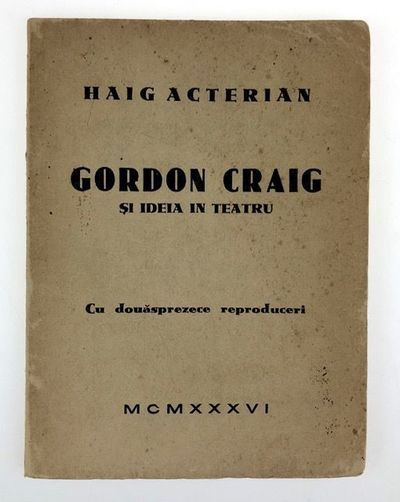 by Acterian, Haig
Burcharest: Vremea, 1936. First edition. First edition. 12mo. Original printed wraps with lettering in black on front cover, line illustration on back cover. Extremely scarce Deluxe Edition, text in Romanian, with wonderful inscription, "This little booklet- one of the deluxe editions- printed in Romania &Rumanian- & written by a Rumanians- is offered To Mees Voodvard [i.e. Daphne Woodward, Craig's lover] by M. Edward Edwardovitch from France in 1936- 22 September [see 1 g where it speaks of Bellot]. Pencil note to verso of front cover in another hand: "Bought with books from the Craig Family- his writing" [referring to presentation inscription]. Daphne Woodward became Criag's secretary and companion in 1929, and mother of his daughter, Daphne, who was always known as "Two Two" as she was born on 22nd May, 1935. Daphne later translated French literature into English, particularly Georges Simenson's Maigret books. Haig Garabet Acterian (1904-1943), was a poet, writer, director and a Romanian theater performer of Armenian origin. A superb preserved copy of a one-of-kind Craig item. (Inventory #: 4489)
$525.00 add to cart or Buy Direct from
Nudelman Rare Books
Share this item