[Craig, Edward Gordon- Special Limited 100 Copies, Craig's Own Copy] Scene, WIth a Foreword and an Introductory Poem by John Masefield 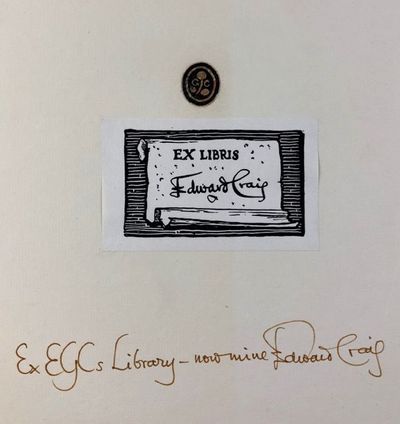 by Craig, Edward Gordon
London: Humphrey Milford, 1923. First edition. First edition. 4to. Special Limited Edition of only 100 Numbered Copies, (copy #78), Signed by Craig, and Specially bound. EDWARD GORDON CRAIG'S OWN COPY, with his oval bookplate, as well his son, Edward Craig's copy, with his bookplate as welll, and with the following note below both: "Ex EGC's Library- now mine, Edward Craig." Bound in full violet fine buckram with gilt triple filet border on cover and EGC gilt monogram cetner, gilt spine. Original worn dust jacket laid in at end. In addition, some ephemera laid in, 4pp. 21 plates after etchings by Edward Gordon Craig, wth his bookplate on front pastedown, with announcement for the book, announcement "A very rare publication, Two Portfolios, 4pp, as well as a few extracted plates, one a portrait of William Rothenstein done by Craig. Book near fine. Scarce thus. (Inventory #: 4485)
$1,250.00 add to cart or Buy Direct from
Nudelman Rare Books
Share this item

London : Macmillan , 1866
(click for more details about [Rossetti, Christina- Fine Copy] The Prince's Progress)
View all from this seller>