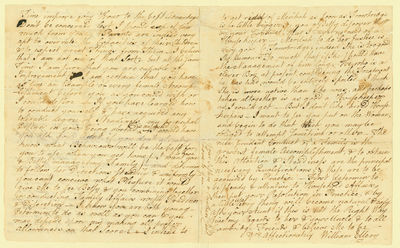 by WILLIAM ELLERY
Future signer of the Declaration of Independence, to his 14-year old daughter on the progress of her education and his desire for her to help manage his household in the wake of her mother's death. "I want to see you put on the Woman, and begin to do that which you may be obliged to attempt sometime or other – The nice, prudent conduct of a Family is the greatest female Accomplishment, & to obtain this attention & Steadiness are the principal necessary Qualifications, & these are to be acquired by Practice" WILLIAM ELLERY.
Autograph Letter Signed, to his daughter, Lucy, June 9, 1766, Newport, R. I. 3 pp., 6⅜ x 7¾ in.

Though I wrote to you very lately, yet as I have a good opportunity by Mr. Turner I can't forbear writing to you now because it will please you to hear from us --- We are all well, & are pleased to find that you have enjoyed so much health – Indeed Lucy We want to see you, 'though I could deny myself that Pleasure for your Good – We talk frequently about you – The Children wonder how you look; - whether you are grown handsomer or taller than you was – If you was to hear them chat about you, & to see how they flock round Me when I recieve a Letter from you, you would not think that we were indifferent about you – I wrote you it will be inconvenient for Me to bring you Home till after Commencement – you have, for aught I know to the Contrary been hitherto contented – I hope you are not impatient to be at Home, and that it will not be disagreable to your Aunt for you to continue with her 'till Commencement – I shall certainly be at Cambridge then if I am alive & well. In the mean [2] Time improve every Hour to the best Advantage. Don't be concerned lest I should expect too much from you – Parents are indeed very apt to overrate the capacities of their Children & to expect great things from them – I believe that I am not one of that Sort, but at the same time I am sure that you are capable of Improvement; I am certain that you have as fine an Example of every female Accomplishment before you as you could wish or I could desire – if you have learned how to conduct yourself & have acquired any tolerable degree of Steadiness my principal Design in your being abroad is answered. I would have you ask your Aunt, if you don't already know what Behaviour will be the best for you to use when you get home (I want to have you & Betty manage my Family). And determine to follow her Directions Steadily & uniformly – you can't concieve what Pleasure it would give Me to see Betty you combining together in conducting Family Affairs with Prudence & Discretion – I know you are both young. Determin to do as well as you can & you may depend upon my making all proper allowances on that Score – I intend to [3] get ridd of Meribak as soon as Trowbridge is a little bigger, if you & Betty discover that by your Conduct, that I have no need of a Housekeeper – Meribak to do her Justice is very good to Trowbridge, indeed she is took good. She humours him so much that if she should have the Management of him long, He who is a clever Boy at present, considering the Treatment he has had, would be entirely spoiled – I think she is more active than she was, and perhaps taken altogether is as good a Housekeeper as I could get – but I don't like hired Housekeepers – I want to see you put on the Woman, and begin to do that which you may be obliged to attempt sometime or other – The nice, prudent conduct of a Family is the greatest female Accomplishment, & to obtain this attention & Steadiness are the principal necessary Qualifications, & these are to be acquired by Practice
– First determin to be Steady & attentive to Household affairs, then put your Resolution in Practice, & by a little use every thing will become natural & easy. Ask your Aunt if this is not the Right Way – Give my Regards to her & your Uncle & to all Cambridge Friends & believe me to be

Your Sisters & Brothers Send Love to You

Ellery lost his first wife, Ann Remington of Cambridge, Massachusetts, in 1764. His daughters were, at that point, too young to take over the running of the household. Lucy was then living with her mother's family in Cambridge, but, as is evident from this letter, her father missed her and looked forward to the day when she could come home and run his household with her sister Betty. Ellery was remarried in 1767 to his second cousin, Abigail Cary.

Lucy did, as her father predicated, marry and bear children. Her husband, William Channing, was a prominent Newport attorney. Their son, William Ellery Channing, born in 1780, became an influential theologian and Unitarian leader.

William Ellery (1727-1820) was a Rhode Island politician who, as a member of the Second Continental Congress (1776-1785), signed the Declaration of Independence. He was born in Newport and educated at Harvard, graduating at the age of 15. He worked as a merchant, and then as a customs collector, before finally entering law and politics, becoming active in the Rhode Island Sons of Liberty. After his political service during the Revolution, he became a vocal advocate for the abolition of slavery. (Inventory #: 21187.99)
$4,800.00 add to cart Available from Seth Kaller
Share this item