“Jerusalem of Gold,” Penned by Naomi Shemer in June 1967 with Verse Added to Celebrate the Recapture of Jerusalem 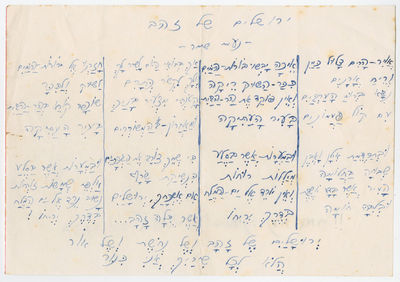 by NAOMI SHEMER
NAOMI SHEMER.
Autograph Manuscript Signed of the lyrics to "Yerushalayim Shel Zahav" / "Jerusalem of Gold," handwritten music manuscript, and a printed booklet with her signature, all in Hebrew.
Despite the UN partition plan and guarantee of access to holy sites, all Jews living in the Old City and the rest of East Jerusalem were forced out by Jordan in 1948. Losing their homes and possessions, they were barred from areas under Jordanian control, and many Jewish holy sites were desecrated. Still, reunification was far from people's minds. In 1967, Israelis again had real reason to fear for the nation's survival, as Arab leaders increasingly declared their plan to "wipe Israel off the map." Seeking simply to affirm the historic connection of the Jewish people, a month before the 1967 Israeli Song Festival, Mayor Teddy Kollek called for a new song dedicated to Jerusalem, and Shemer was asked to write it. Worried that she would not find inspiration in time, at first she demurred, but soon changed her mind.

That same day, President Nasser sent the Egyptian army into the Sinai. After ordering the UN Emergency Force to withdraw, on May 22, Egypt closed the Straits of Tiran to Israeli shipping, blockaded Eilat (which, by definition was an act of war), interrupted Israel's trade with Asia, and halted oil imports from its main supplier, Iran.

Egypt, Jordan, Syria, and Lebanon, together fielded more than 450,000 troops, 2,800 tanks, and 800 aircraft, all being marshalled to focus on the destruction of Israel. Rather than waiting for the promised attack, on June 5, Israel preemptively struck, destroying nearly the entire Egyptian air force, and sending ground forces back to the Sinai.

Prime Minister Levi Eshkol reached out to King Hussein of the Hashemite Kingdom of Jordan, promising that Israel would not attack if Jordan refrained from attacking Israel. However, at least partly due to false Russian and Egyptian claims that Israel's Sinai strike had failed, within an hour the Jordanian army started shelling West Jerusalem.

Facing challenges to its survival on every side, Israel literally had no plans to take Jerusalem, but Israeli forces were ordered to stop the shelling and relieve Mount Scopus. After pitched battles, Eshkol again offered King Hussein a way out, to no avail. On June 7, at 6:15 a.m., the Israeli Defense Forces (IDF) were ordered to enter Jerusalem, while being cautioned against doing any harm to the ancient walls and sites. Incredibly, by 10:08 a.m., the Old City was under Israel's control. Defense Minister Moshe Dayan and IDF Chief of Staff Yitzhak Rabin soon arrived to witness a shofar blown at the Western Wall.

Kollek telegraphed Shemer, who was in the Sinai with her IDF band, asking her to add a new verse to celebrate. Inspired by what had just taken place, she promptly did so: "The wells are filled again with water, The square with joyous crowd, On the Temple Mount within the City, The shofar calls out loud."

Her official manuscript, now in the Naomi Shemer Archive at the National Library of Israel, was first reproduced in print by June 28, 1967. She apparently penned our nearly identical copy at the same time.

2. NAOMI SHEMER, Autograph Musical Manuscript Signed, "Jerusalem of Gold," in pencil on both sides of the leaf. Titled and signed by Shemer, with handwritten notes on the margins (in Hebrew): play one octave higher; change at the end of the song; or mezzo; the same chord. 24.5 x 17 cm. Slight tears & creases, stains, still fine.

3. NAOMI SHEMER, Printed booklet Signed on the front cover, 13 July 1967, "Jerusalem of Gold." Self-published: "All rights reserved by Naomi Shemer," Arieli Press, Tel Aviv, [prior to June 28] 1967. Printed bristol sheet, folded in half, reproducing Shemer's manuscript lyrics (as noted, nearly identical to our copy). With brief notes and transcription of the lyrics in Latin letters, though not including the added verse. 17 x 12.5 cm. Good condition despite some stains.

The copy in the Naomi Shemer Archive at the National Library of Israel has her signed dedication to her mother, dated June 28, 1967.

In three days of fighting, Israel had captured the Sinai, the West Bank, the Gaza strip and the Old City of Jerusalem. The UN Security Council's call for a cease-fire was immediately accepted by Israel and Jordan, and a day later by Egypt. On June 9, in response to continuing Syrian shelling, Israel captured the Golan Heights. The war ended the next day, once Syria accepted a cease-fire. It is estimated that 15,000 Egyptian, 2,500 Syrian, and 800 Jordanian troops died in the war. Israel's losses were a fraction of what they would have been she allowed the combined Arab armies to strike first, but still severe: 777 dead and 2,586 wounded. In proportion to population, this was about twice the total of American losses in all eight years of the Vietnam War.


The mountain air is clear as water.

The scent of pines around

Is carried on the breeze of twilight,


The trees and stones there softly slumber,

A dream enfolds them all.

So solitary lies the city,

And at its heart a wall.


The wells ran dry of all their water,

The Temple Mount dark and deserted,

In the Old City there.


And in the caverns in the mountain,

The winds howl to and fro,

That leads through Jericho.

Oh, Jerusalem of gold, and of light and of bronze,

I am the least of all your children,

Of all the poets born.


Your name will scorch my lips forever,

If I forget thee, golden city,


The wells are filled again with water,

The square with joyous crowd,

On the Temple Mount within the City,

The shofar [calls] out loud.


Within the caverns in the mountains,

A thousand suns will glow,

That runs through Jericho.

Arthur Schopenhauer noted, "A major difficulty in translation is that a word in one language seldom has a precise equivalent in another one." A Russian proverb, despite being sexist, is still telling: "Translation is like a woman: if she is faithful, she is not beautiful; if she is beautiful, she is not faithful." We chose the translation by Chayah Galai, published by the Israel Ministry of Foreign Affairs in "50 Years of Hebrew Song." However, having seen several other translations, we took the liberty of "correcting" two words, replacing "And tinkling bells resound" with "And ringing bells resound," and "The shofar rings out loud" with "The shofar calls out loud." Galai wrote "I am a lute for all your songs," but now that strikes us as too much like the later "I am the wind beneath your wings," So we use a different translation based on the translation of the source of that verse, Rabbi Yehuda Halevi's "Songs to Zion."

"The city that sits alone" is from the first verse of the Book of Lamentations, and "If I forget thee Jerusalem" is from Psalm 137. The most interesting source for "a City of Gold" or "a crown of gold" (with an engraved city mural, a bridal gift for the very wealthy) is the story of a jealousy-inducing gift that Talmudic legend Rabbi Akiva gave to his wife Rachel.

Ex-Yermiyahu [Jeremiah] 'Yerri' Rimon. According to David Glassman, Yerri "combined encyclopedic knowledge with an especially good eye for quality and in-depth understanding. His collection was immensely broad but he nonetheless could talk passionately about every single item it contained, in detail." The two manuscript documents were purchased at a local Israeli auction house in the 1980s, and the printed copy of the song was purchased at another auction, around the same time.

Concerned that if anything happened to him, his family would not know which items were important, in 1993 Yerri started penciling in notes and values. On the verso of the lyrics, he wrote [in Hebrew]: "In the handwriting of the poet and composer Naomi Shemer!/ Estimate $2,000 7.94" On the musical Manuscript, he wrote, "Estimate $2,000 7.94"

We know of only one other Shemer handwritten copy having been sold. Penned around 1987, and donated by her to benefit the Friends of the Israel Air Force, the lyrics helped inspire an American philanthropist to make a $1,000,000 gift at the "Israel Air Force at 50" gala in 1998.

A Supposed Controversy Over a Basque Influence

Shemer was often asked about the similarity of her tune to an old Basque lullaby, "Pello Joxepe," composed by Juan Francisco Petriarena 'Xenpelar' (1835–1869). For many years, she denied knowing that song, but subsequently learned that she had in fact heard it sung by Spanish singer Paco Ibáñez, who visited Israel in 1962. Also, her friend Nehama Hendel heard Ibáñez perform it at the same time, and sometime in the mid-1960s, Shemer likely heard Hendel perform it. A May 5, 2005 article by Tom Segev in Haaretz reported on a letter that Shemer wrote just days before she died, telling friend and composer Gil Aldema of the tremendous guilt she felt after the unconscious influence was brought to her attention. (Translated)

"I consider the entire affair a regrettable work accident - so regrettable that it may be the reason for me taking ill… I also didn't know that an invisible hand dictated changes in the original to me.... It turns out that someone protected me and provided me with my eight notes that grant me the rights to my version of the folk song. But all this was done, as I said, unwittingly.... My only comfort is that I tell myself that perhaps it is a tune of the Anusim [Spanish or Portuguese Jews who were forced to convert but secretly practiced Judaism] and all I did was restore past glory."

In a follow-up article the next day, Ibáñez, asked how he felt about the issue, replied that Shemer had no reason to feel bad, and that he was "glad it helped in some way."

Jerusalem of Gold was used in the sound track of the 1991 film "Pour Sacha," about the Six-Day War, and again in 1993 at the end of "Schindler's List" (though, responding to Israeli criticism about the appropriation of a beloved song that had nothing to do with the Holocaust, a more relevant track replaced it for showings in Israel). It was chosen as the "Song of the Jubilee" for Israel's 50th Independence Day in 1998, and is widely considered the unofficial national anthem. (Inventory #: 25672)
$125,000.00 add to cart Available from Seth Kaller
Share this item