Marion Brown delivering a load of tan bark from the sheds across from the tannery. 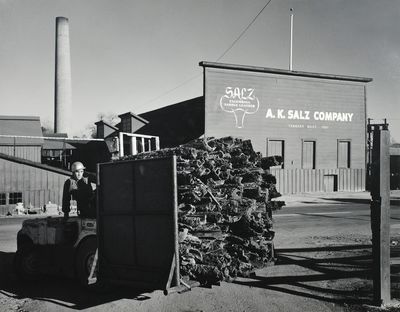 by Adams, Ansel.
San Francisco: 1955. Single black and white photograph, 13 1/4 x 10 3/8”, mounted on 1/8” thick board. Signed by Ansel Adams to lower right-hand corner, with his studio stamp, "131 - 24th Avenue San Francisco," and "Neg. No. AA-COM-1-83" to the back. Very good on a slightly toned board. § From the Salz Tannery commission circa 1955. These clear black and white photos documented Santa Cruz leather manufacturing, now a by-gone era. Ansley Salz, owner of Salz tannery, was a longtime friend of Adams, and donated his Cadillac to Adams, which would later appear in some of his more famous photographs. (Inventory #: 108125)
$2,250.00 add to cart or Buy Direct from
John Windle, Bookseller
Share this item

Shakespere: his Birthplace, Home and Grave. A Pilgrimage to Stratford-on-Avon in the Autumn of 1863.

London : Lovell
(click for more details about Shakespere: his Birthplace, Home and Grave. A Pilgrimage to Stratford-on-Avon in the Autumn of 1863.)

A New System of Music, Both Theoretical and Practical and not yet mathematical ...

London : Printed for the Autor [sic] , 1725
(click for more details about A New System of Music, Both Theoretical and Practical and not yet mathematical ...)
View all from this seller>