Harry Potter and the Philosopher's Stone. 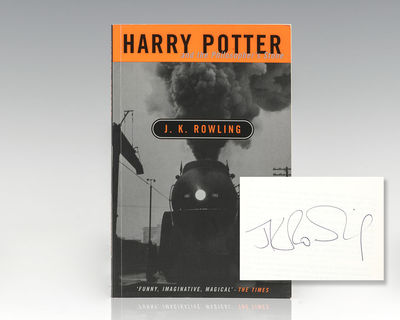 by Rowling, J.K
London: Bloomsbury, 1998. First adult paperback edition of the first book in the Harry Potter series. Octavo, original illustrated wrappers. Signed by J.K. Rowling on the dedication page. In fine condition. Harry Potter and the Philosopher's Stone is the first novel in the Harry Potter series and J. K. Rowling's debut novel, first published in 1997 by Bloomsbury. The writing has been compared to that of Jane Austen, one of Rowling's favourite authors, or Roald Dahl, whose works dominated children's stories before the appearance of Harry Potter, and of the Ancient Greek story-teller Homer. It has been translated into several languages and has been made into a feature-length film of the same name. (Inventory #: 99778)
$3500.00 add to cart or Buy Direct from
Raptis Rare Books
Share this item