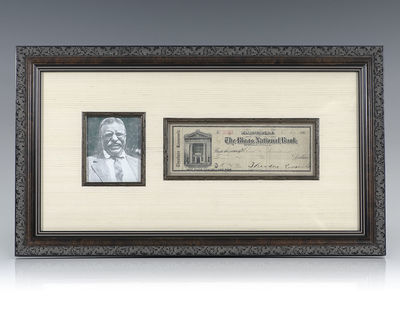 by Roosevelt, Theodore
1907. Rare original Theodore Roosevelt Riggs National Bank Check, signed by Roosevelt as President. Paid to the order of Schwab and Gassenheimer on November 25th, 1907 for the amount of ten dollars. Double matted and framed with a portrait of Roosevelt. The check measures 8 inches by 3 inches. The entire piece measures 21 inches by 11.75 inches. Rare and desirable signed by Roosevelt as president. Theodore Roosevelt was an American statesman, author, explorer, soldier, naturalist, and reformer who served as the 26th President of the United States from 1901 to 1909. As a leader of the Republican Party during this time, he became a driving force for the Progressive Era in the United States in the early 20th century. (Inventory #: 94710)
$2,500.00 add to cart or Buy Direct from
Raptis Rare Books
Share this item