The Constitution of Liberty. 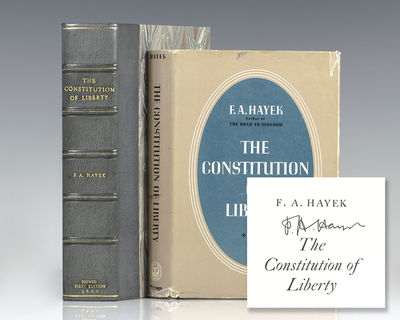 by Hayek, Friedrich August von [F.A.]
Chicago: The University of Chicago, 1960. First edition of Hayek's classic statement on the ideals of freedom and liberty. Octavo, original cloth. Boldly signed by F.A. Hayek on the title page. Fine in a near fine dust price-clipped jacket with a few small closed tears. Housed in a custom half morocco clamshell box. Co-winner of the 1974 Nobel Prize in Economics and a prominent member of the "Austrian School" of economic thought, Hayek went "beyond [Ludwig von] Mises in reformulating the notion of economic coordination as an information problem, competition acting essentially as a discovery process" (Blaug, 557). Hayek's main contributions as an economist have been his arguments about the benefits of free markets and the information provided by prices. These arguments lead to the conclusion that attempts to alter or control markets should be opposed because they inevitably limit individual freedom, reduce economic efficiency and lower living standards. Markets, for Hayek, were self-regulating devices that promote prosperity. Government policy and other attempts to hinder the workings of markets make us worse off economically and reduce individual liberty" (Pressman, 119). The Constitution of Liberty, written for a general audience on the occasion of the centennial of John Stuart Mill's On Liberty, provides "a positive statement of the principles of a free society" and "a thorough exposition of a social philosophy which ranges from ethics and anthropology through jurisprudence and the modern welfare state." "One of the great political works of our time, . . . the twentieth-century successor to John Stuart Mill's essay, 'On Liberty" (Henry Hazlitt). Named by Modern Library as one of top 100 books of non-fiction of the twentieth century. Also named by The Times Literary Supplement as one of the most hundred influential books since World War II. (Inventory #: 99700)
$18,000.00 add to cart or Buy Direct from
Raptis Rare Books
Share this item

Frankenstein; Or, The Modern Prometheus.

Western Portraiture and Emigrants’ Guide: A Description of Wisconsin, Illinois, and Iowa.

New York : J. H. Colton , 1852
(click for more details about Western Portraiture and Emigrants’ Guide: A Description of Wisconsin, Illinois, and Iowa.)
View all from this seller>