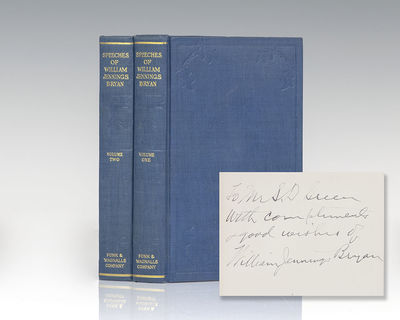 by Bryan, William Jennings
New York: Funk & Wagnalls Company, 1913. First edition of the collected speeches of William Jennings Bryan. Small octavo, two volumes, original blind-stamped cloth with gilt titles to the spine, top edge gilt, engraved frontispiece portrait of the author with tissue guard to volume I. With a biographical introduction by Mary Baird Bryan, his wife. Presentation copy, inscribed by the author on the front free endpaper of volume II, "To Mr. S. D. Green with compliments & good wishes of William Jennings Bryan." In near fine condition. A sharp set. In 1896, Nebraska politician William Jennings Bryan emerged as a powerful figure in the Democratic party where he stood three times as the party's nominee for President of the United States. Jennings also served as the United States Secretary of State under Woodrow Wilson and, shortly before his death, gained national attention for attacking the teaching of evolution in the Scopes Trial. (Inventory #: 96117)
$700.00 add to cart or Buy Direct from
Raptis Rare Books
Share this item