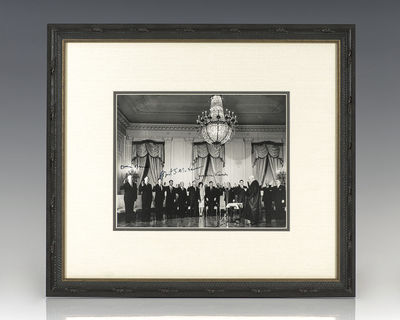 signed first edition
by Kennedy, Jacqueline; Robert McNamara and Dean Rusk. [John F. Kennedy]
Rare original photograph of the swearing-in ceremony of President John F. Kennedy's cabinet on January 21st 1961. Signed by Jacqueline Kennedy, Robert S. McNamara, and Dean Rusk. Double matted and framed. The entire piece measures 15 inches by 17 inches. Kennedy brought to the White House a contrast in organization compared to the decision-making structure of former-General Eisenhower; he selected a mixture of experienced and inexperienced people to serve in his cabinet including Robert McNamara, who was well known as one of Ford Motor Company's "Whiz Kids" as Secretary of Defense and Dean Rusk, a restrained former Truman official, as Secretary of State. Unlike Eisenhower, Kennedy did not have a chief of staff, but instead relied on a small number of senior aides, including appointments secretary Kenneth O'Donnell. (Inventory #: 94711)
$2,500.00 add to cart or Buy Direct from
Raptis Rare Books
Share this item