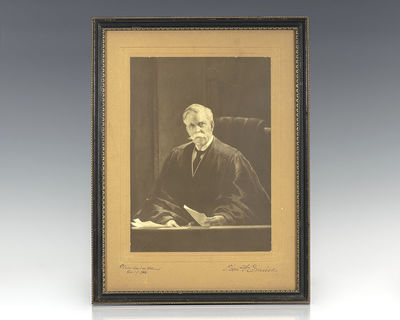 by Holmes, Jr., Oliver Wendell
1922. Autographed photograph of a painted portrait of Justice Oliver Wendell Holmes, signed and dated April 5, 1922. Also signed by the photographer. Double matted and framed. The photograph is 11 inches by 8 inches. Matted and framed, the entire piece measures 16.5 inches by 12.5 inches. Oliver Wendell Holmes Jr. was an American jurist who served as an Associate Justice of the Supreme Court of the United States from 1902 to 1932, and as Acting Chief Justice of the United States January-February 1930. Noted for his long service, his concise and pithy opinions and his deference to the decisions of elected legislatures, he is one of the most widely cited United States Supreme Court justices in history, particularly for his "clear and present danger" opinion for a unanimous Court in the 1919 case of Schenck v. United States, and is one of the most influential American common law judges, honored during his lifetime in Great Britain as well as the United States. Holmes retired from the Court at the age 90, making him the oldest Justice in the Supreme Court's history. He also served as an Associate Justice and as Chief Justice on the Massachusetts Supreme Judicial Court, and was Weld Professor of Law at the Harvard Law School, of which he was an alumnus. (Inventory #: 99431)
$3,800.00 add to cart or Buy Direct from
Raptis Rare Books
Share this item