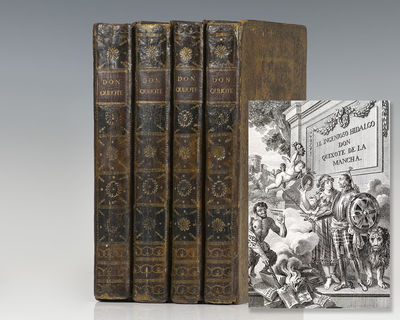 by Cervantes Saavedra, Miguel de
Madrid: Don Joaquin Ibarra, 1780. The deluxe illustrated Ibarra edition of Cervantes' masterpiece "which is to Spanish literature what Shakespeare is to English" (Bloom). Quartos, 4 volumes. Bound in full contemporary Spanish tree calf with gilt titles and tooling to the spine, red and black morocco spine labels, elaborate double gilt-ruled borders, marbled endpapers, all edges gilt, engraved frontispiece to each volume and 31 engraved plates throughout, 2-page folding engraved map of Don Quixote's travels to the rear of volume 1. Spanish printer Joaquin Ibarra made several important technical developments in press printing, book-making, typography and paper-making. In his printed work, Ibarra sought to achieve a perfect flow of harmonious type, inks, illustration, margins, and textures. He worked with the best painters and engravers of his time and, based on a secret formula he developed, the Ibarra ink gained a reputation for its exceptional quality and brilliance. The present volume was printed on "ex profeso" paper with melted types of "ex novo" on the pages, both of which Ibarra created in his Madrid workshop specifically for this project. In near fine condition with ownership inscriptions and some toning to the page edges, some loss to the edges of the license page. A very bright example of both Cervantes' and Ibarra's best-known works, rare and desirable in this condition. Often cited as the first modern novel, Cervantes' masterpiece Don Quixote remains not only the most influential work of literature to emerge from the Spanish Golden Age, but the most important work of the entire Spanish literary canon. First published in 1605, Don Quixote gained immediate popularity in Spain for its "variety, liveliness, and gibes at the famous" while Cervantes' universal portrayal of the human condition has cemented its status as "one of those universal works which are read by all ages at all times" (PMM). The Ibarra edition swiftly became the preferred edition in Spain when it appeared in 1780 (Palau, 52024). "It is interesting to realize that the first modern novel was composed by a sick, aged and impoverished man, who believed that a satirical tale might produce more revenue than the poems and plays that he regarded as his more serious mission. Under the guise of a parody on romances of chivalry, Cervantes created a study of reality and illusion, madness and sanity, that links him with such acute 16th-century students of psychology as Erasmus, Rabelais, Montaigne, and Shakespeare" (Folger's Choice, 30). (Inventory #: 96554)
$22,000.00 add to cart or Buy Direct from
Raptis Rare Books
Share this item

Bruxelles : Lacroix, Verboeckhoven & Ce , 1862
(click for more details about Les Miserables.)
View all from this seller>