The Times They Are A-Changin’ Bob Dylan Signed Vinyl. 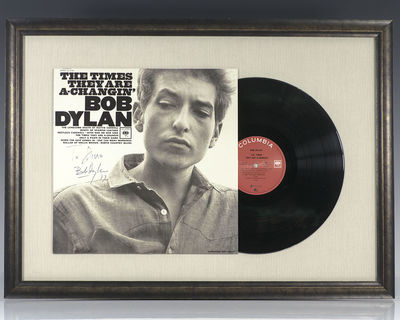 signed first edition
by Dylan, Bob
Modern pressing of Dylan's third studio album The Times They Are a-Changin'. Inscribed by Bob Dylan, "To Dino Bob Dylan '17." Included is a letter of provenance from the original recipient which reads in part, "On April 26, 2017, I was at the Swiss Life Hall in Hannover...to see Dylan's concert and meet some European tour managers...I had an 'all areas' pass which allowed me to access the external but reserved area of the concert hall. Dylan and his band had just got off the buses heading for catering/dressing room area...At that moment I presented him the LP 'The times they are a-changin' and a black marker. Bob did not say a word." Matted and framed, the entire piece measures 26 inches by 19 inches. Signed examples of this particular album do not appear often. For many listeners in the early 1960s Dylan embodied the ideals of the folk revival: a young hobo, drifting out of the West, singing old songs he had learned in his travels and writing new songs about the trials, troubles, and tribulations of the world around him. He wrote songs about everything that came into his mind--love songs, outlaw ballads, rhymed comic monologues, ragtime novelties, blues--but for a lot of people, what mattered most were his songs of social consciousness. He was hailed as the voice of a generation, and the pressure to live up to that description increasingly felt like a burden. Dylan's third studio album, The Times They Are a-Changin', was Dylan's first album to feature only original compositions including the title track which Dylan composed as a deliberate attempt to create an anthem of change for the time, influenced by Irish and Scottish ballads. (Inventory #: 96536)
$8,800.00 add to cart or Buy Direct from
Raptis Rare Books
Share this item