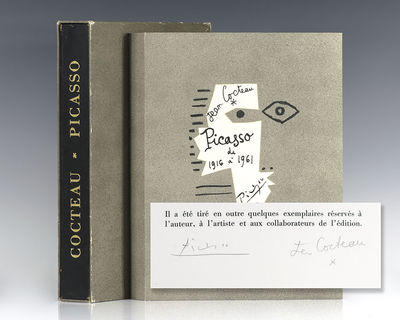 by Picasso, Pablo and Jean Cocteau
Monaco: Editions du Rocher, 1962. Signed limited folio edition of original lithographs by Pablo Picasso reproducing his major works between 1916 and 1961, and produced by Jean Cocteau upon the occasion of Picasso's 80th birthday. One of only 199 copies signed by both Picasso and Cocteau, this is number 46. Folio, loose leaves as issued in the original pictorial wrappers, lithographic frontispiece and 22 original lithographs by Picasso, 6 of which are full page and 2 of which are double-page. In fine condition. Housed in the original vellum-backed portfolio with gilt titles to the spine and original slipcase. Rare and desirable linking two great artists of the 20th century. Picasso and Cocteau met in 1916 towards the end of World War I at the height of Picasso's synthetic cubism period. The period marked the first use of collage in the history of fine art and the series depicted highly geometric and minimalist Cubist objects, mainly pipes, guitars and glasses. Picasso and Cocteau would later collaborate on several projects, including the present volume which offers an overarching collection of Picasso's diverse periods from Cubism to Picasso's late years. (Inventory #: 94703)
$9,000.00 add to cart or Buy Direct from
Raptis Rare Books
Share this item

Bruxelles : Lacroix, Verboeckhoven & Ce , 1862
(click for more details about Les Miserables.)
View all from this seller>