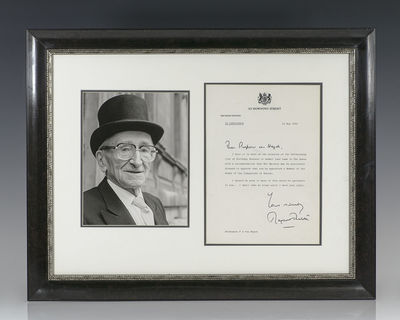 by Thatcher, Margaret. (Friedrich von (F.A.) Hayek)
1984. Exceptional letter signed by Prime Minister Margaret Thatcher to Nobel Prize-winning economist Friedrich von Hayek. One page, on Thatcher's official 10 Downing Street letterhead and dated May 22nd 1984, the letter reads, "Dear Professor Hayek," I have it in mind on the occasion of the forthcoming list of Birthday Honours to submit your name to The Queen with a recommendation that Her Majesty may be graciously pleased to approve that you be appointed a Member of the Order of the Companions of Honour. I should be glad to know if this would be agreeable to you. I shall take no steps until I have your reply. "Yours sincerely, Margaret Thatcher." Accompanied by a large original black and white photograph of Hayek taken at the honorary appointment at Buckingham Palace in which, he was in fact, awarded the Companion of Honour Medal by Queen Elizabeth II. In fine condition. Matted and framed, the entire piece measures 24.5 inches by 19 inches. An exceptional piece of history. The Order of the Companions of Honour was established by King George V on June 4th 1917 as a reward for outstanding achievements to be "conferred upon a limited number of persons for whom this special distinction seems to be the most appropriate form of recognition, constituting an honour disassociated either from the acceptance of title or the classification of merit." Hayek was appointed a Companion of Honour in the 1984 for his "services to the study of Economics". The appointment was attended by a 20 minute audience with the Queen followed by dinner at the Institute of Economic Affairs. That evening, after the festivities, Hayek is reported to have said "I've just had the happiest day of my life". (Inventory #: 96254)
$22,500.00 add to cart or Buy Direct from
Raptis Rare Books
Share this item

London : Reynal and Hitchcock , 1943
(click for more details about The Little Prince.)
View all from this seller>