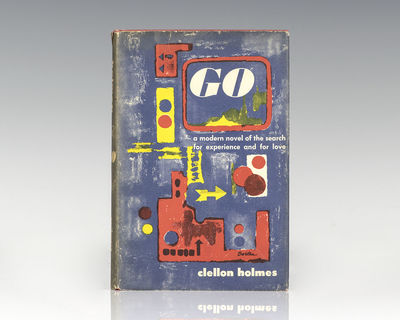 by Holmes, John Clellon
New York: Charles Scribner's Sons, 1952. First edition of the novel that launched the Beat Generation's literary legacy and describes the world of Jack Kerouac, Allen Ginsberg, and Neil Cassady and "one of the best novels about the Beat Generation...brilliant and important" (Los Angeles Free Press). Octavo, original cloth. Fine in a near fine dust jacket. Jacket design by Helen Borten. A very nice example. Drafted two months before Jack Kerouac began On The Road, Go is the first and most accurate chronicle of the private lives lived by the Beats before they became public figures. In honest, lucid fictional prose designed to capture the events, emotions, and essence of his experience among the Beats, Holmes describes an individualistic post-World War II New York where crime is celebrated, writing is revered, and parties, booze, discussions, drugs, and sex punctuate life. "Go signaled the start of something new in American literature. A generation with a new consciousness had found its voice"( Ann Charters) The most tentative and conservative of the Beats, Holmes's intelligent and sensitive voice also details the pressures and regrets that his lifestyle gave birth to. With portraits of Jack Kerouac, Allen Ginsberg, Neil Cassady, William Burroughs, this first novel about the Beat Generation gives a peek into what it meant to be a Beat before the term had ever been used. (Inventory #: 79537)
$1,250.00 add to cart or Buy Direct from
Raptis Rare Books
Share this item

They Call Me Coach.

New York : Prentice-Hall , 1952
(click for more details about The Power of Positive Thinking.)
View all from this seller>