The End of Poverty. 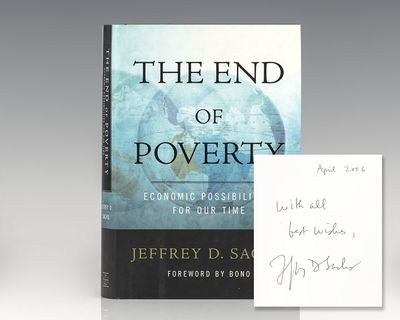 by Sachs, Jeffrey D.; Foreword by Bono
New York: Penguin Press, 2005. First edition of this landmark exploration of economic prosperity and how the world can escape from extreme poverty for the world's poorest citizens, from one of the world's most renowned economists. Octavo, original boards. Signed by the author on the front free endpaper, "With all best wishes Jeffrey Sachs April 2006." Fine in a fine dust jacket. Jacket design by Peter Mendelsund. Foreword by Bono. Hailed by Time as one of the world's hundred most influential people, Jeffrey D. Sachs is renowned for his work around the globe advising economies in crisis. Now a classic of its genre, The End of Poverty distills more than thirty years of experience to offer a uniquely informed vision of the steps that can transform impoverished countries into prosperous ones. Marrying vivid storytelling with rigorous analysis, Sachs lays out a clear conceptual map of the world economy. Explaining his own work in Bolivia, Russia, India, China, and Africa, he offers an integrated set of solutions to the interwoven economic, political, environmental, and social problems that challenge the world's poorest countries. (Inventory #: 44653)
$100.00 add to cart or Buy Direct from
Raptis Rare Books
Share this item