Travels into Several Remote Nations of the World. In Four Parts. By Lemuel Gulliver, first Surgeon, and then Captain of several Ships (Gulliver’s Travels). 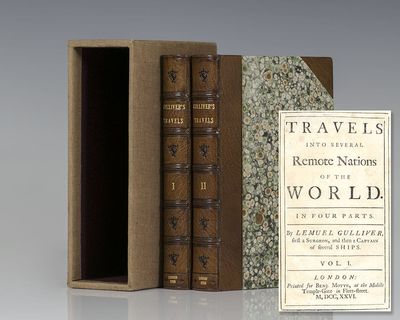 by Swift, Jonathan
London: Benjamin Motte, 1726. First editions of Jonathan Swift's masterpiece, Gulliver's Travels. Octavo, bound in three quarters contemporary calf over marbled boards, engraved frontispiece of Lemuel Gulliver, woodcut initials, five engraved maps, gilt titles to the spine. In near fine condition. Housed in a custom cloth slipcase. Bookplate to the pastedown and period ownership signature to each volume. Both volumes are the Teerink B edition. A very nice example of this classic in English literature. Jonathan Swift's masterpiece will "last as long as the language, because it describes the vices of man in all nations" (DNB). "A remarkable feat in the creation of imaginary worlds as a vehicle for satire upon the political and religious establishments of the day" (Clute & Grant, 914). "Gulliver's Travels has given Swift an immortality beyond temporary fame". For every edition designed for the reader with an eye to the historical background, 20 have appeared, abridged or adapted, for readers who care nothing for the satire and enjoy it as a first-class story" (PMM 185). "Of all Swift's writings it best shows the merits of his mind and his gifts of expression". It is important to realize that it could be written only by one who had the highest ideals for human achievement and who despaired of the achieving" (Baugh et al., 865-66)""although Swift himself expressed this hope for his "Travells" to a friend: "They are admirable Things, and will wonderfully mend the world" (Rothschild 2104). (Inventory #: 95317)
$18,000.00 add to cart or Buy Direct from
Raptis Rare Books
Share this item