The Incredulity of Father Brown. 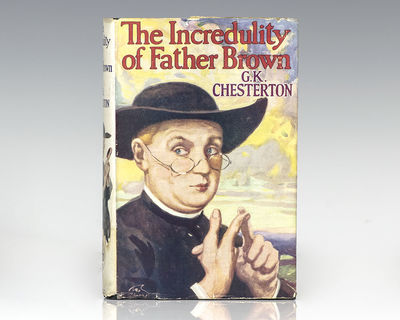 by Chesterton, G.K
London: Cassell and Company, Ltd, 1926. First edition of Chesterton's third-published collection featuring the fictional detective Father Brown. Octavo, original cloth. Near fine in a very good dust jacket. Uncommon in the original jacket. Often referred to as the "prince of paradox", English poet, philosopher and lay theologian Gilbert Keith Chesterton became well known for his fictional priest-detective Father Brown, and for his reasoned apologetics. The fictional Roman Catholic priest and amateur detective Father Brown came to be featured in 53 short stories published between 1910 and 1936. Chesterton loosely based the character on the Right Reverend Monsignor John O'Connor (1870-1952), a parish priest in Bradford, who was involved in Chesterton's conversion to Catholicism in 1922. (Inventory #: 96578)
$3,500.00 add to cart or Buy Direct from
Raptis Rare Books
Share this item