The Adventures of The Black Girl in Her Search For God. 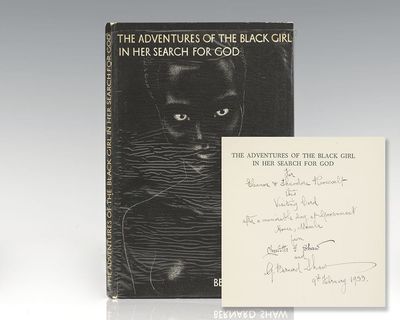 by Shaw, George Bernard
Constable & Company Limited: London, 1932. First edition of George Bernard Shaw's short story collection, including the satirical allegorical title story: The Adventures of The Black Girl in Her Search For God. Octavo, original illustrated boards, pictorial endpapers, designed and illustrated with engravings by John Farleigh. Association copy, inscribed by the author on the half-title page, "To Eleanor and Theodore Roosevelt this Visiting Card after a memorable day at Government House, Manila from Charlotte F. Shaw and G. Bernard Shaw 9th February 1933." Mr. and Mrs. George Bernard Shaw stopped at Manila on a round-the-world cruise where they were invited to lunch with Theodore Roosevelt Jr., the eldest son of Theodore Roosevelt, and his wife Eleanor Butler Alexander-Roosevelt where they enjoyed lunch and Shaw assisted in editing one of Theodore's reports to the war department. Laid is is a small copy of a selection of pages from Eleanor Butler Alexander-Roosevelt's 1959 autobiography 'Day Before Yesterday' which describes the visit in detail and also mentions the occasion upon which they received the current inscribed volume in the mail after the Shaw's visit. In near fine condition. In the original glassine which is in very good condition. Rare and desirable with exceptional provenance. The Black Girl, as protagonist in the present volume, serves the same purpose as Christian in John Bunyan's The Pilgrim's Progress; that is to say her own "inner", or "spiritual" life is represented as a series of physical events and encounters. After becoming dissatisfied with the inconsistencies of the answers the missionary who has converted her gives to her questions, the Black Girl wanders into the forest on a literal search for God. Having a powerful intellect capable of formulating searching theological questions, and exposing vapid answers, the Black Girl so becomes superior to the inferior insipid white missionary woman, challenging popular prejudice, both in sex and race. (Inventory #: 96134)
$4,000.00 add to cart or Buy Direct from
Raptis Rare Books
Share this item