A Grain of Wheat. 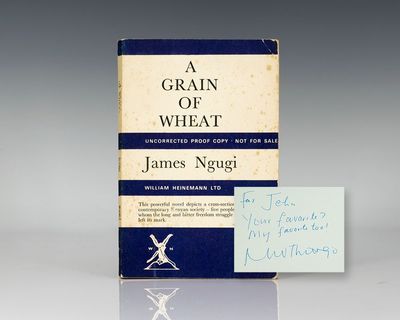 by Ngugi, James
London: William Heinemann, 1967. Uncorrected proof of the first edition of the author's magnum opus. Octavo, original wrappers as issued. Warmly inscribed by Ngugi on the title page, "For John Your favorite? Mine too! Ngugi." In very good condition with some spotting to the wrappers. Set in the wake of the Mau Mau rebellion and on the cusp of Kenya's independence from Britain, A Grain of Wheat follows a group of villagers whose lives have been transformed by the 1952–1960 Emergency. At the center of it all is the reticent Mugo, the village's chosen hero and a man haunted by a terrible secret. As we learn of the villagers' tangled histories in a narrative interwoven with myth and peppered with allusions to real-life leaders, including Jomo Kenyatta, a masterly story unfolds in which compromises are forced, friendships are betrayed, and loves are tested. (Inventory #: 45014)
$2,000.00 add to cart or Buy Direct from
Raptis Rare Books
Share this item