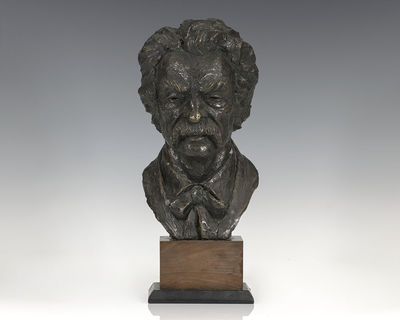 by Holland, Thomas [Mark Twain]
1966. Sculptural bust of the wild-haired American author by Thomas Holland. Faux antique bronze, mounted on a walnut base. Signed by the artist, "T. Holland" on the rear of the bust. Best remembered as a sculptor and avid polo player, California native Thomas Holland created a variety of bronze pieces primarily depicting equestrian themes and major literary figures. The entire piece measures 17 inches tall. In near fine condition. "To understand America, read Mark Twain. No matter what new craziness pops up in America, I find it described beforehand by him He was never innocent, at home or abroad" (Garry Wills). "High and fine literature is wine," Twain once wrote, "and mine is only water; but everybody likes water." Raised in Hannibal, Missouri, which later provided the setting for Tom Sawyer and Huckleberry Finn, Samuel Clemens, of Mark Twain, was lauded in his obituary as the "greatest humorist this country has produced." His 1885 novel, The Adventures of Huckleberry Finn is often referred to as "The Great American Novel." (Inventory #: 94704)
$850.00 add to cart or Buy Direct from
Raptis Rare Books
Share this item