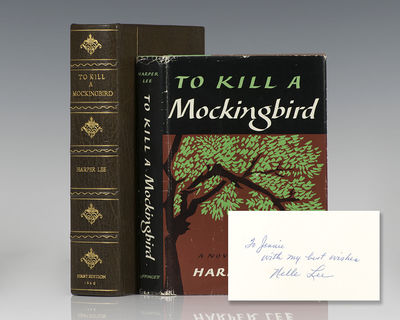 by Lee, Harper
Philadelphia: J.B. Lippincott Company, 1960. First edition of Lee's Pulitzer Prize-winning novel which had an initial first printing of 5,000 copies. Octavo, original green cloth backed brown boards, titles to spine in gilt. Presentation copy, inscribed by the author on the front free endpaper in a contemporary hand, "To Jennie with my best wishes Nelle Lee." The recipient must have been a person close to the author, as Lee reserved inscriptions using the name Nelle family members and close friends. Near fine in a near fine dust jacket with light rubbing and wear to the extremities. Jacket design by Shirley Smith. Photograph of Lee on the back panel by Truman Capote. Housed in a custom full morocco clamshell box. To Kill a Mockingbird became an immediate bestseller and won the 1961 Pulitzer Prize for Fiction. The New Yorker declared it "skilled, unpretentious, and totally ingenious". It has gone on to become of the best-loved classics of all time and has been translated into more than forty languages selling more than forty million copies worldwide. Made into the Academy Award-winning film, directed by Robert Mulligan, starring Gregory Peck. It went on to win three Oscars: Best Actor for Gregory Peck, Best Art Direction-Set Decoration, Black-and-White, and Best Screenplay for Horton Foote. It was nominated for five more Oscars including Best Actress in a Supporting Role for Mary Badham, the actress who played Scout. In 1995, the film was listed in the National Film Registry. In 2003, the American Film Institute named Atticus Finch the greatest movie hero of the 20th century. In 2007 the film ranked twenty-fifth on the AFI's 10th anniversary list of the greatest American movies of all time. It was named the best novel of the twentieth century by librarians across the country (Library Journal). (Inventory #: 99740)
$50,000.00 add to cart or Buy Direct from
Raptis Rare Books
Share this item