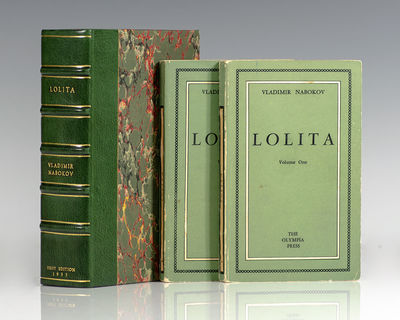 by Nabokov, Vladimir
Paris: The Olympia Press, 1955. First edition of Nabokov's masterpiece, published in Paris by the Olympia Press in 1955. First issue with the price of 900 francs on the rear panel of each volume. Octavo, 2 volumes, original green wrappers. In near fine condition with light rubbing, some toning to the extremities. Housed in a custom half morocco clamshell box. A nice example. "Brilliant One of the funniest and one of the saddest books that will be published this year" (New York Times). "Lolita blazes with a perversity of a most original kind, for Mr. Nabokov has distilled from his shocking material hundred-proof intellectual farce. Lolita seems an assertion of the power of the comic spirit to wrest delight and truth from the most outlandish materials. It is one of the funniest serious novels I have ever read; and the vision of its abominable hero, who never deludes or excuses himself, brings into grotesque relief the cant, the vulgarity, and the hypocritical conventions that pervade the human comedy" (Atlantic Monthly). The novel became the basis for the 1962 Stanley Kubrick film starring James Mason and Peter Sellers. (Inventory #: 95381)
$6,500.00 add to cart or Buy Direct from
Raptis Rare Books
Share this item

The Clicking of Cuthbert.

London : Herbert Jenkins , 1926
(click for more details about The Clicking of Cuthbert.)

To the Ends of the Earth: A Sea Trilogy [Rites of Passage, Close Quarters and Fire Down Below].

London : Faber and Faber , 1991
(click for more details about To the Ends of the Earth: A Sea Trilogy [Rites of Passage, Close Quarters and Fire Down Below].)
View all from this seller>