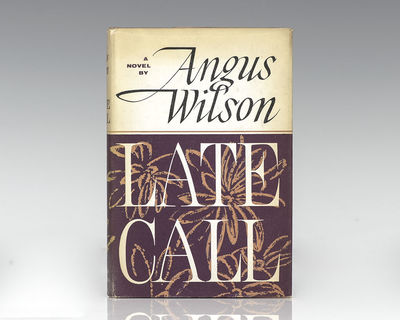 by Wilson, Angus
London: Seeker & Warburg, 1964. First edition of Wilson's satirical comedy. Octavo, original cloth. Near fine in a near fine dust jacket. Jacket design by Ralph Mabey. A sharp example. One of England's first openly gay authors, novelist Sir Angus Frank Johnstone-Wilson's writing, which has a strongly satirical vein, generally expressed his concern with the preservation of a liberal humanistic outlook in the face of fashionable doctrinaire temptations. Last Call is the story of Sylvia Calvert, the eldest daughter of a Suffolk farmer who has spent the majority of her life as the manageress of a second class seaside hotel. Finding herself ill, she retires to the country house of her widowed son where she struggles to adjust to modern society. (Inventory #: 96194)
$65.00 add to cart or Buy Direct from
Raptis Rare Books
Share this item