The Bridge of San Luis Rey. 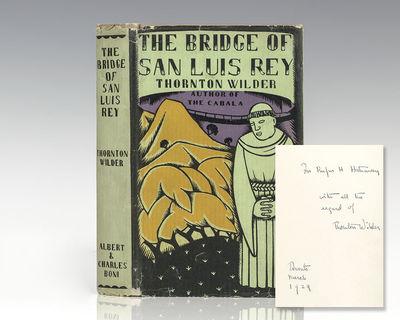 by Wilder, Thornton
New York: Albert & Charles Boni, 1927. First edition of the author's masterpiece and winner of the Pulitzer Prize. Octavo, original cloth, cartographic endpapers, illustrated by Amy Drevenstedt. Presentation copy, inscribed by the author, "For Rufus H. Hathaway with all the regard of Thornton Wilder Tornoto March 1929." Near fine in a good jacket reinforced to the verso. Illustrated by Amy Drevenstedt. Housed in a custom chemise jacket with red morocco spine label. "Few novels identify their basic plotline as succinctly and forthrightly as the opening line of Thornton Wilder's 1927 novel, The Bridge of San Luis Rey: "On Friday noon, July the twentieth, 1714, the finest bridge in all Peru broke and precipitated five travelers into the gulf below." The novel's conceit is this: a certain Brother Juniper was himself about to step out onto the bridge when it broke and subsequently witnessed the plunge of five people into the abyss below. Brother Juniper wonders if the tragedy happened according to a divine plan or was simply a random instance of misfortune. His curiosity leads him to investigate the lives of the five victims to prove that the bridge collapse and the resulting deaths were indeed divine intervention--that God intended for them to die then and there. But, of course, the point of the novel is that there is no commonality among them, other than the fact that they are all simply human, with their own frailties. Wilder ends his at-once urgent and serene novel with this haunting passage: "But soon we shall die and all memory of these five will have left the earth, and we ourselves shall be loved for a while and forgotten. But the love will have been enough; all those impulses of love return to the love that made them. Even memory is not necessary for love. There is a land of the living and a land of the dead, and the bridge is love, the only survival, the only meaning" (Brad Hooper). "One of the greatest reading novels in this century's American writing...Wonderfully lucid reading" (Edmund Fuller). Named by Modern Library as one of the 100 greatest novels of the 20th century and named by Time Magazine as one of its 100 Best English-language novels from 1923-2005. (Inventory #: 96138)
$2,800.00 add to cart or Buy Direct from
Raptis Rare Books
Share this item