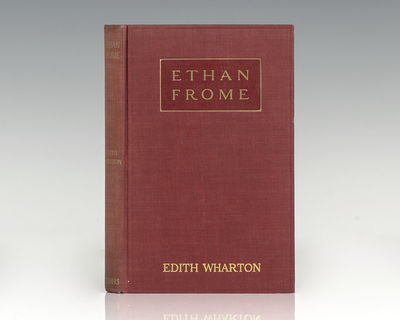 by Wharton, Edith
New York: Charles Scribner's Sons, 1911. First edition, first issue with "wearily" in perfect type on penultimate line of page 135 and with four pages of publisher's advertisements at rear, of Wharton's greatest tragic story, a "grim tale of a bud of romance ice-bound and turned into a frozen horror in the frigid setting of a New England winter landscape" (The New York Times). Octavo, original cloth, gilt titles to the spine and front panel, gilt topstain. In near fine condition contemporary name to the front free endpaper. A very nice example. There are only three or four American novelists who can be thought of as major," noted Gore Vidal, "and Edith Wharton is one." Her Ethan Frome "shows a marked departure from the ironic contemplation of aristocratic mores... the central problem is that of the barriers imposed by local conventions upon an individual whose happiness depends on rising above them" (Hart 813). (Inventory #: 98455)
$1,800.00 add to cart or Buy Direct from
Raptis Rare Books
Share this item