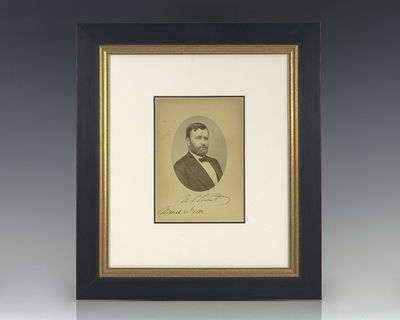 signed first edition
by Grant, Ulysses S. (Mathew Brady)
Rare original Mathew Brady photograph of Ulysses S. Grant. Boldly signed by Grant as the 18th President of the United States, "U.S. Grant March 18th 1875." One of the earliest photographers in American history, Mathew B. Brady brought home the reality of the Civil War to the American public with his innovative use of a mobile studio and darkroom to capture thousands of war scenes throughout the Civil War. Brady was also recognized as one of the premier photographic portraitists of the 19th century, taking photographs of numerous celebrities including Andrew Jackson, John Quincy Adams, Abraham Lincoln, and Robert E. Lee among others. Double matted and framed. The entire piece measures 19 inches by 16.5 inches. In near fine condition. Rare and desirable with such a strong signature signed by Grant during his presidency. Ulysses S. Grant served as president of the United States from March 4, 1869 to March 4, 1877. On January 29, 1877, (five days before he left office), Grant gave an address to the Senate of the United States regarding a controversial dispute that had arisen over the results of the upcoming presidential election. In the address, Grant argued that the people must put their trust in Congress, stating: "In all periods of history controversies have arisen as to the succession or choice of the chiefs of states, and no party or citizens loving their country and its free institutions can sacrifice too much of mere feeling in preserving through the upright course of law their country from the smallest danger to its peace on such an occasion; and it can not be impressed too firmly in the hearts of all the people that true liberty and real progress can exist only through a cheerful adherence to constitutional law. (Inventory #: 94709)
$18,500.00 add to cart or Buy Direct from
Raptis Rare Books
Share this item