A Collection of 770 Snapshots of Dogs [Photography, Vernacular Photography] 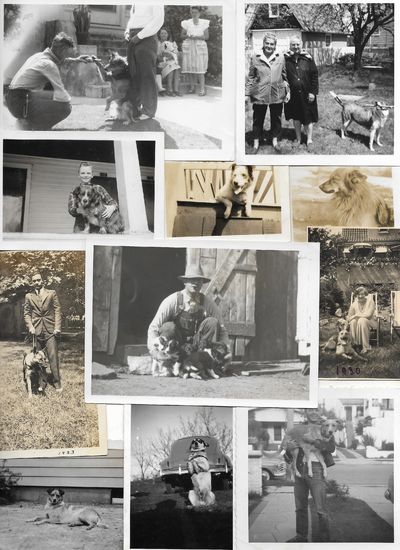 by [Photography, Vernacular Photography]
A fascinating and entertaining assemblage of photographs featuring dogs of all sizes and varieties. While only a handful of images have locations and names noted, most of the images appear to be American, though several European dogs have wandered in. Of the 770 snapshots, 165 are dated, either by hand or in the print, and range from 1915 to 1974, with a single image from 1987. Most of the photos are from the 1930s to the 1950s. Black and white images account for 712 of the photos, with 58 color images. Most of the images are in very good condition, though some have edge wear, creases, chips, small tears, and broken corners, and 34 of the images have been trimmed. There are paper remnants—from being removed from albums at some point—on 176 of the photographs. An amazing variety of images, with dogs on vacation, a dog on a horse, teeny-tiny dogs in the arms of well-dressed women, dogs on chairs, dogs pulling carts, show dogs posing, military dogs, dogs doing tricks, hunting dogs, hiking dogs, puppies, a boy and his dog on the first days of school, a wary mom introducing her newborn to the family boxer, dogs sleeping, lounging, and eating, lots of pictures of dogs as proud members of the family, and a yawning dog with his family and master – a Nazi officer. In many of the photos, dogs are the center of attention. They are being cradled, steadied by human hands, or gracefully posing with their family or on their own. But in many images the dogs are interlopers, wandering into the frame or demanding your attention, even when they are simply drawing your eye as they nap in the background, living, as photographer Elliott Erwitt said, "on two planes at once, juggling the dog world against the human world."1 A wonderful collection of vernacular photography. (Inventory #: 2968)
$2000.00 add to cart Available from Bay Leaf Books
Share this item