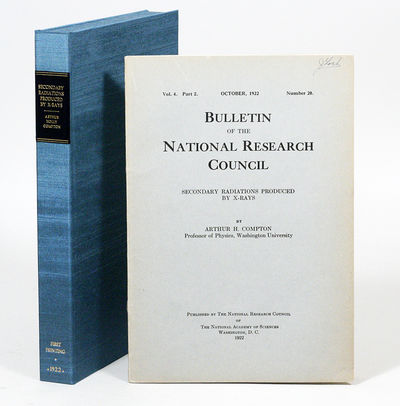 by COMPTON, ARTHUR HOLLY
Washington, DC: The National Research Council of The National Academy of Sciences, 1922. First edition. Original wrappers. Fine. FIRST EDITION IN ORIGINAL WRAPPERS of Compton's report providing the data and experimental evidence for the dual wave-particle nature of electromagnetic radiation, later called "the Compton effect". "One surprise Compton observed while wrestling with his X-ray equipment was that the scattered X-ray changes its frequency. He had explored the effect very deeply to make sure it really resulted from the scattering and not from one of the many secondary effects. Finally he had obtained a clear picture: X-rays approach the metal at a different frequency. This change was like discovering that a violet flower's mirror image looks red... "Compton eventually wrote a report for the National Research Council in which he set forth his X-ray data and observations. Although he still had no explanation for the frequency change, he included it and many other findings in his data, establishing numbers and equations that had long eluded physicists. He also showed a new experimental way of using X-rays to calculate the number of electrons in an atom. This technique, at last, gave physicists an independent technique to confirm quantum assumptions about atomic structure. Compton had moved to the first rank among experimental physicists, but he still wondered about that frequency change. Why does a scattered X-ray change frequency but light bouncing off a mirror does not?" Toward the end of his paper, Compton entertains the idea of light quanta, but then dismisses it. He writes on page 55: "The experiments described above, showing that the wave-length of the scattered X-ray is greater than that of the incident X-ray, present, however, a serious difficulty to this conclusion. This change in wave-length was found to receive quantitative explanation on the view that the radiation was received and emitted by each scattering electron in discrete quanta. No alternative explanation has as yet suggested itself. Nevertheless, the cogency of the argument based on interference phenomena is so great that it seems to me questionable whether the quantum interpretation is the correct one." Only a few weeks later, however, Compton changed his mind. In November, he "gave his breakthrough lecture, telling his students that the theory of light quanta was indispensable for explaining his X-ray scattering experiments... In December he reported his discovery to the American Physical Society's annual meeting, and two weeks later he sent the report to The Physical Review. The journal, however, was not in the habit of receiving revolutionary papers and did not schedule its publication until May 1923" (Bolles, Einstein Defiant: Genius Versus Genius in the Quantum Revolution). IN: Bulletin of the National Research Council, Vol 4, Part 2, No. 20, October 1922. pp. 1-56 [the whole issue]. Washington, D.C.: The National Research Council of The National Academy of Sciences, 1922. Octavo, original wrappers; custom box. Small owner signature on front wrapper. Just a touch of toning to wrapper edges. An extremely rare survival in such fine condition. (Inventory #: 2248)
$3,500.00 add to cart or Buy Direct from
Manhattan Rare Book Company
Share this item