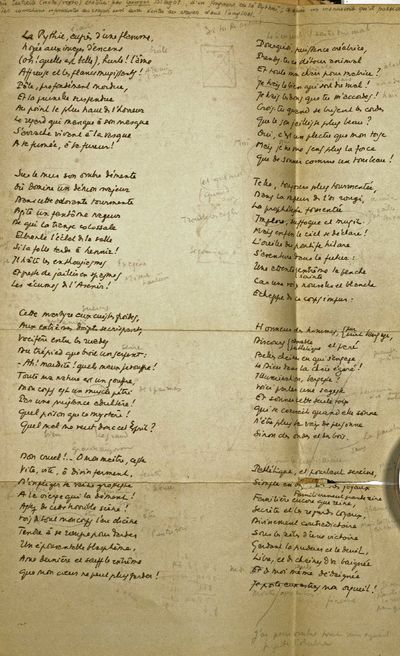 by Valéry , Paul.
Full description below

Valéry , Paul. La Pythie in Les Écrits Nouveaux, Vol II, Février, 1919, #14. Paris: Émile-Paul 1919. Pages5-16 of 124p. 8vo. Contemporary marbled board, cloth spine, morocco label, 124p original wrappers boundin. La Pythie first appears here. Other writings appear by André Suarés, Jean Giradoux, P.-J. Toulet, etc.La Pythie is a poem by Valéry that shows "a dark picture with one narrow margin of luminosity." Writtenin 1918 in a dangerous period of the war in which Paris was being shelled, the poem is taken from legendsrelating to the oracular temple of Apollo at Delphi, earlier named Pytho. Also the poem is named for theprophetess Pythia. The bulk of the poem is taken up with her lamentations at her servitude. (Chisolm (pp21-28). (Inventory #: 983781)
$750.00 add to cart Available from Golden Legend
Share this item
Golden Legend, Inc.
Offered by