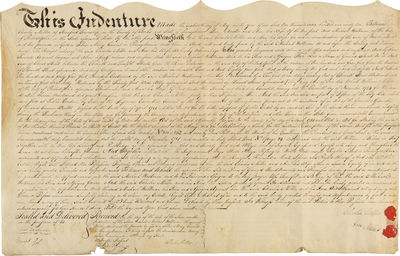 by [ Pennsylvania
Philadelphia, 1792. Oblong broadside, 15 1/4 x 24 inches, on vellum, decoratively trimmed at top, and docketed on verso. Small hole and gnawed area at bottom, else very good. This indenture records a transaction between Charles Miller, an iron master of Hereford Township, and his wife, and Michael Waltman, a porter of Philadelphia. The Millers sell to Waltman four lots on the north side of Locust Street, between Eleventh and Twelfth streets, in Philadelphia, for L110. The document is signed by the Millers, with their seals, Peter Richards and [?] Lob. It is witnessed on the verso by James Cutler [?], recorder, with the paper seal of the "Inrollment Office for City & County of Philadelphia" affixed (Inventory #: WRCAM17105)
$300.00 add to cart or Buy Direct from
William Reese Co. - Americana
Share this item

GAINESVILLE: THE GREAT HEALTH RESORT OF THE SOUTH. THE BUSINESS CENTER OF NORTHEAST GEORGIA. ITS ADVANTAGES AND RESOURCES

[Atlanta : Budden & Son , ca. 1890].
(click for more details about GAINESVILLE: THE GREAT HEALTH RESORT OF THE SOUTH. THE BUSINESS CENTER OF NORTHEAST GEORGIA. ITS ADVANTAGES AND RESOURCES)
View all from this seller>