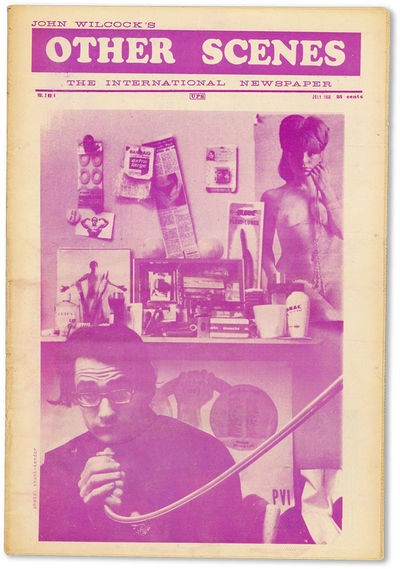 by [NEW LEFT / COUNTERCULTURE] BUKOWSKI, Charles, Julius Lester, and Alan Solomon, et al. (contributors)
New York: John Wilcock, 1968. First Edition. Paperback. Though never as popular or widely-circulated as its brethren like The East Village Other and The Berkeley Barb, nor as political as such radical-left undergrounds as The Black Panther and New Left Notes, John Wilcock's Other Scenes probably deserves pride of place as the most daring, creative, and experimental of the alternative press papers of the late Sixties. It was also - probably a function of Wilcock's comparative maturity (he was already in his late thirties in 1967) - far less reliant on the sort of psychedelic mish-mosh that defined the aesthetic of most other underground papers of the period. Described in the masthead as "a revolutionary newsletter concerned with art, politics, sociology, sex and the creation of a more equitable society," Other Scenes was heavily influenced by both the Fluxus and mail-art movements as well as Andy Warhol's avant-pop aesthetic (Wilcock was a regular Factory denizen). The paper operated as much as a virtual underground club for its subscribers as it did a vehicle for news distribution; according to the masthead of an early issue, Wilcock distributed the paper "twenty times a year from wherever its editor happens to be," and his mailings often included "surprises" including "newsletters, newspapers, letters, brochures and discoveries that I make in all parts of the world." Contents include contributions by Alan Solomon, Julius Lester, Ronald Willis, Brenda Mull, Don Peterson, Jacques Zavrian, and others, with comix by R. Crumb, and a "Notes of a Dirty Old Man" column by Charles Bukowski. Tabloid (43cm); photo-illustrated newsprint wrappers; [24]pp; illus. Mild toning along spine-fold, else a very Near Fine, unfolded copy, without postal markings. (Inventory #: 44386)
$150.00 add to cart or Buy Direct from
Lorne Bair Rare Books
Share this item

Collected Philosophical Papers (3 vols). 1: From Parmenides to Wittgenstein. 2: Metaphysics and the Philosophy of Mind. 3: Ethics, Religion and Politics

The Closed Shop is Dictatorial