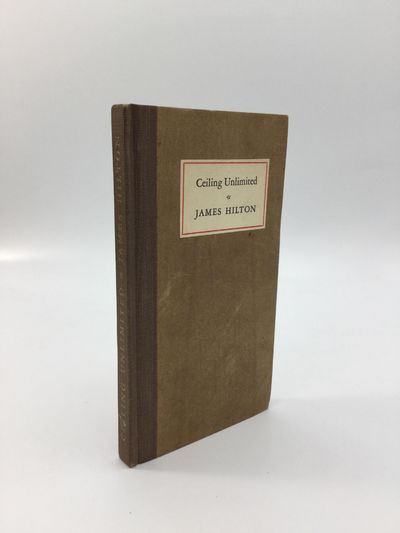 by Hilton, James
Burbank, California: Columbia Broadcasting System, 1943. First Edition. Hardcover. Very good. This is No. 24 of 100 copies signed by the author. A series of six broadcasts on the Columbia Broadcasting System from June 28, 1943, to August 2, 1943, sponsored by the Lockheed Aircraft Corporation and the Vega Aircraft Corporation. Conceived to glorify the aviation industry and dramatize its role in World War II, Ceiling Unlimited was created by Orson Welles, who hosted the first thirteen episodes. Hilton (1900-54) was among several personalities who hosted the radio program thereafter, including Marlene Dietrich, Cary Grant, Basil Rathbone, and Edward G. Robinson. Each of Hilton's broadcasts were issued in pamphlet form; all six have been gathered here and specially bound. 16mo. Original brown paper-covered boards over a brown cloth spine, with gilt titles along the spine and a printed paper title label on the front panel. Mild wear to the corners and tips; else very good or better. (Inventory #: 69496)
$350.00 add to cart Available from Johnson
Share this item

CONFERENCE OF THE BOOKS: The Search for Beauty in Islam

Lanham, Maryland : University Press of America, Inc , 2001
(click for more details about CONFERENCE OF THE BOOKS: The Search for Beauty in Islam)
View all from this seller>