In the Trades, the Tropics, & the Roaring Forties 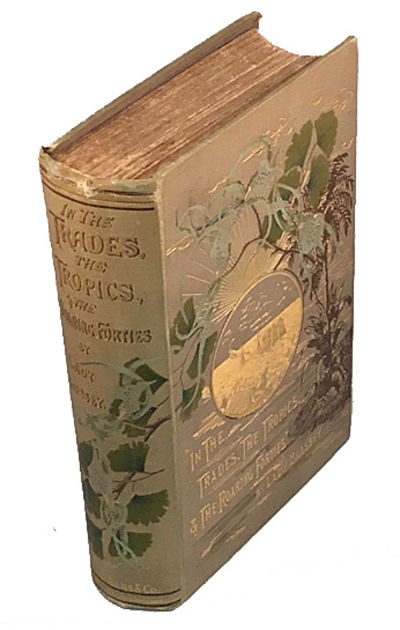 by Brassey, Lady (Baroness Anna Brassey)
London: Longmans, Green, & Co, 1885. First edition. Hardcover. Near Fine. Large 8vo. xiv, [2], 532 pp. Original publishers grey cloth with decorations stamped in blue, brown, green, and gilt on the front and rear boards and the spine. Illustrated by nine coloured maps, (two of which are fold-out) and by 292 illustrations engraved on wood by G. Pearson and J. Cooper after drawings by R.T. Pritchett. Brassey's last book published during her lifetime: one would be released after her death in 1887, chronicling her last journey on her yacht "The Sunbeam", made in an attempt to restore her health ("Brassey, Anna", Edward Henry Marshall, DNB). In this volume Brassey recounts her travels to Lisbon, Jamaica, Venezuela, the Bahamas, the Azores, Bermuda, Trinidad and Tobago, and Madeira. She spends a great deal of her book describing the food and culture of the regions which she visited. Brassey recounts the sights of orange groves, cacao trees, local farms, the process of docking her yacht at each new destination, and the storms and mechanical problems she encountered along her journey. Brassey also discusses her impressions of the native people of the Caribbean, and their culture. She experienced the railroad system of Caracas, Venezuela, and the natural history of the Caribbean (she writes about conch shells, colorful fish, fossils, and the caves of some of the islands). Brassey made an effort to document the food and environmental history of each place encountered in her travels. A fascinating account of a woman's experiences sailing around the Caribbean in the late nineteenth century. A Near Fine book with an occasional spot of foxing to the preliminary and final leaves. An 1888 Christmas gift inscription on the half-title page, from The Minchead Girls' School: "Beatrice E. Ling. Prize for Geography (Senior Div.) to B. Farrow. Principal." An exceptionally clean and bright copy. (Inventory #: 00008085)
$750.00 add to cart or Buy Direct from
Evening Star Books
Share this item

All items subject to prior sale.ï¿½ Certain items and shipping to certain countries may exceed the standard shipping amounts.ï¿½ Any shipping expenses incurred above the standard rate will be billed at cost. Payment is in US dollars.ï¿½ Personal checks must clear prior to shipment (please allow 10 days).ï¿½ Books may be returned within 30 calendar days of delivery for any reason, so long as we are notified of return within 10 days of delivery.ï¿½ Return items must be well packaged and fully insured and must be returned in same condition as sold. Any book described as a First Edition is also a First Printing unless otherwise indicated.
More from this seller